What If God-belief Is Hard-wired Into Us? 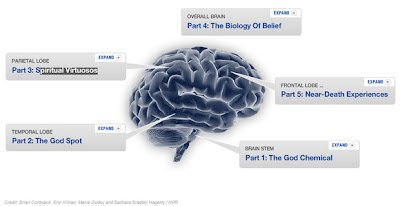 Theistic philosopher Michael Murray of the U. of Notre Dame has an interesting and helpful essay called “Belief in God: A Trick of Our Brain?” (In Contending With Christianity’s Critics: Answering New Atheists & Other Objectors, eds. Paul Copan and William Lane Craig) He agrees that religious belief in God is probably hard-wired into persons; that such hard-wiring does not provide either a rejection or affirmation of the existence of God; and that, on Christian theism, it is the kind of thing we could expect if God exists, viz., that God would make us so as to know that he exists. Here are some quotes and explanatory comments.

“We now have conclusive evidence that human minds come into the world with all sorts of “software” both preinstalled and booted up.” (47) For example, studies show that babies know that 1+1 = 2, and not 1 or 3.

Are human beliefs about morality and religion hard-wired? Murray says “there is a good deal of evidence that lots of human behavior we would describe as “moral” arises from innate or hard-wired dispositions… (M)oral beliefs and desires appear to be part of our built-in “operating system.” ” (49)

When, for example, we see someone commit a crime or hurt someone else, we feel strongly that the wrongdoer needs to be punished. Is our response the result of some reasoning process? Murray says that “there is good evidence to suggest that something more is going on. In fact, there is reason to think that our tendency to want to punish is wired into our thought processes in a way that runs far ahead of any reasoned thought process.” (50)

Murray gives examples in psychology and neuroscience that argue for, not only the hard-wiring of morality, but the hard-wiring of “many of our natural dispositions towards religion.” (51) “God is hard-wired into our brain.” Some think this discovery is devastating for theists. Murray asks: “Does recent psychology and neuroscience show us that belief in God is the result of a hard-wired natural psychological process?” Murray’s answer is: “Probably.”

Murray then examines evidence for this claim. He writes, for example: “There is strong evidence that we are naturally disposed from an early age to see goal-directedness in everything, including the natural world. Cognitive theorists call this tendency “intuitive theism” or “natural teleology” since it is a tendency to see purposiveness as a pervasive feature of our world. This naturally disposes us to believe in a purpose-giving force in the universe, that is, to believe in gods or a God.” (52)

Some scientists think this shows that the God-impulse is just some trick our minds play on us. Murray asks, “Are these scientists right? Has science shown belief in God to be a delusion?” Murray responds, “Not exactly.” Those who argue this way seem to do so as follows.

1. The development of the mind through natural history has provided those minds with a number of special properties.
2. When considering the natural and social world, these properties encourage humans to believe in god.
3. Therefore, the development of human minds has produced belief in gods (i.e., God is an accident of evolution).
4. Therefore, belief in gods is false.

The problem with this kind of reasoning is that it commits the genetic fallacy. (See my post here.) One cannot use the origin of a belief to argue for the truth or falsity of that belief.
Murray then revises the argument so it does not commit the genetic fallacy.

1. The development of the mind through natural history has provided those minds with a number of special properties.
2. When considering the natural and social world, these properties encourage humans to believe in god.
3. Therefore, the development of human minds has produced belief in gods (i.e., God is an accident of evolution).
4. Therefore, belief in gods is unwarranted.

If the reasoning is formulated this way it seems that many of our beliefs would be unwarranted such as, e.g., the belief that science can discover the truth. “So why not conclude that we get things right when it comes to belief in God? What makes this case different? One could say: “Well, because religious belief is false.” But that is not much of an argument; it just assumes what the critic was trying to prove.” (56)

Murray concludes that “psychological accounts of religious belief do not teach us that we would have religious beliefs whether or not they are true. And so they do not undermine the justification for religious belief. As a result, this argument fails.” (57)

Murray’s points are, in summary:

1) God-belief is probably hard-wired into humanity.
2) This neither proves nor disproves whether or not there is a God.
3) For the Christian theist innate God-belief makes sense. That is, if God exists, it would make sense that God would make us in such a way so as to believe in him. “This discovery echoes the claim made four hundred years earlier by John Calvin that “there is within the human mind, and indeed by natural instinct, an awareness of divinity.” (57; citing Calvin’s Institutes, 1.3.1)
Posted by John Piippo at 9:47 PM