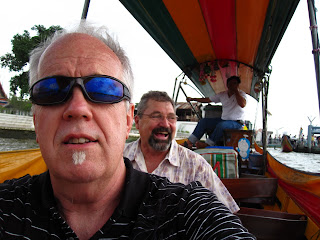 (Me and my friend Joe LaRoy, riding in a Chevy-powered longtail boat through the canals of Bangkok)

I am home from an incredible week in Bangkok, We left our Bangkok hotel at 3 AM Thursday (3 PM Wed. EST). 25 hours later we touched down in Detroit. It's good to be home with Linda and Josh!

I kept a journal while there and sent large portions of it to the Monroe Evening News. The News is going to publish parts of it this Monday, and then link to my entire journal with photos I took. Go here: monroenews.com.

I will be thinking about my trip for many days, and seeking God as to things he wants me to know and do. Here's a bullet-point review, given from a reclining position in my bedroom at home, 9 PM, where jet lag is kicking in big-time.

"Typically, katoeys dress and live as women. They undergo hormone replacement therapy, most have breast implants, and eventually have genital reassignment surgery done. They go to great lengths to conceal any tell-tale signs of masculinity, including surgery to reduce the size of the Adam's apple and other medical procedures to shape their bodies more like those of women (jawbone, hips, buttocks) - even voice chord surgery.


Katoeys are fully integrated in and accepted by Thai society, even on the countryside. Those who don't work in restaurants, bars and cabaret shows hold regular jobs like nurses, secretaries, beauticians, stylists, and some even become popular TV stars.

Many become prostitutes though; the most beautiful ones count among the highest paid sex workers in Thailand. It is believed that the acceptance they enjoy in society is due to the nature of the surrounding Buddhist culture, which places a high value on tolerance. Thais believe that being a katoey is the result of transgressions in past lives (the notion of Karma), and that katoeys deserve pity rather than blame. Sadly, legal recognition of katoeys is non-existent in Thailand. Even after genital reassignment surgery they are not allowed to change their legal sex. Katoeys often belong to lower social classes, and their suicide rate is significantly higher than that of any other segment of the Thai population. Still, many go on to make their mark."

I feel closer to Jesus than I did a week ago. I think I see more of what's at stake, and feel more convinced that Jesus' message of his beautiful kingdom is the answer to all that aches inside of us.
Posted by John Piippo at 9:34 PM