Out of the Loop

I've been out of the loop in the past few weeks with a number of things.
- I taught at Palmer Theological Seminary to 8 Doctor of Ministry students 1/15-1/20. A great experience! My course is called Personal Transformation. I've taught it at Palmer since 1996.
- Some great, talented people from our church have been redoing our bathroom. We're a one-bathroom family! Our house was built in 1863. It's adjacent to the land where George Custer lived. I think our bathtub was so old that Custer probably bathed in it. So, we got a new bathtub, getting newly tiled walls, new vanities, new floor, etc. It may be all done a week from today.
- FYI - I'm still preaching on Sunday mornings on "The Real Jesus." I am greatly enjoying this, and learning much myself. I now feel as if I am reading the 4 Gospels for the very first time.
- I began reading Levine's A Misunderstood Jew - excellent!
- I just got in the mail today Victor Reppert's C.S. Lewis's Dangerous Idea: In Defense of the Argument from Reason. I've heard good things about this book and am anxious to read it.
Posted by John Piippo at 1:15 PM

Thanks, Josh, for pointing out to me New Testament scholar Ben Witherington's blog post "Angry Apostles of Atheism Attack."
Posted by John Piippo at 7:48 PM

A Portrait of "Generation Next"

The Pew Foundation has published their new report called "A Portrait of "Generation Next": How Young People View Their Lives, Futures and Politics." You can access the summary report here. From there you can link to the full report.

Here are some of the summary findings of today's 18-25-year-olds.

They use technology and the internet to connect with people in new and distinctive ways. Text messaging, instant messaging and email keep them in constant contact with friends. About half say they sent or received a text message over the phone in the past day, approximately double the proportion of those ages 26-40.

Their parents may not always be pleased by what they see on those visits home: About half of Gen Nexters say they have either gotten a tattoo, dyed their hair an untraditional color, or had a body piercing in a place other than their ear lobe. The most popular are tattoos, which decorate the bodies of more than a third of these young adults.

One-in-five members of Generation Next say they have no religious affiliation or are atheist or agnostic, nearly double the proportion of young people who said that in the late 1980s. And just 4% of Gen Nexters say people in their generation view becoming more spiritual as their most important goal in life.

Pentecostalism Is Huge in the World Today

The Economist (12/23/06-1/5/07) has a very good, and lengthy, article on
Pentecostalism in the world today. "Pentecostalism is not only burning through
the “cities of the dispossessed.” ...It is also consuming the business and
professional elites of the developing world."
Posted by John Piippo at 3:35 PM 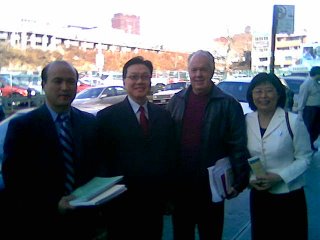 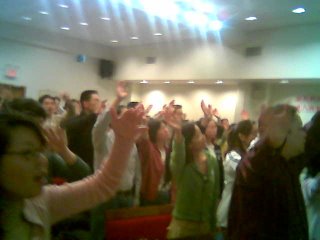 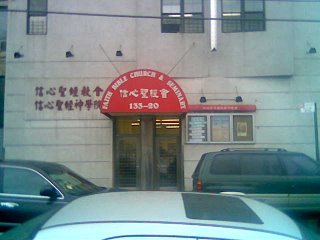 Friday and Saturday I was at Faith Bible Church and Seminary in Queens, New York City. Thank you Pastor John Hao and Rosie Hao for inviting me to be with you, and for your great hospitality! I very much enjoyed being with you and your people.

Twenty Chinese Churches in the NYC area came together - over 300 at the conference. We had beautiful weather (70 degrees!), and I enjoyed eating great food.

I gave my testimony to a group of young adults, presented two workshops on "Philosophical Arguments for the Existence of God" and "Signs and Wonders in the World Today." And I gave the keynote address on "Experiencing the Power and Glory of God."

I'll be praying for all of you and am expecting God to do great things through you as you walk in the authority God has given you to advance the Kingdom of God and push back the kingdom of darkness.
Posted by John Piippo at 4:47 PM

Go here to discover how the Essenes acted on the autonomic functions.
Posted by John Piippo at 1:16 AM 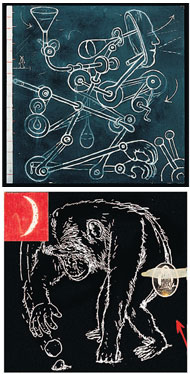 Today's nytimes.com has a good article on the current status of the free will debate.

Are free will and determinism compatible, or incompatible?

Do persons have "free will?"

If persons do not have free will certain problems arise. To conclude this, it seems, undermines a lot of things, to include theorizing about the nature of free will and determinism. And, if free will is just an "illusion" then the idea that persons are morally "responsible" for their actions seems to be incoherent. The article states: "The death of free will, or its exposure as a convenient illusion, some worry, could wreak havoc on our sense of moral and legal responsibility. According to those who believe that free will and determinism are incompatible, Dr. [Michael] Silberstein said in an e-mail message, it would mean that “people are no more responsible for their actions than asteroids or planets.” Anything would go."

Daniel Dennett says “when we consider whether free will is an illusion or reality, we are looking into an abyss. What seems to confront us is a plunge into nihilism and despair.”

But then Dennett says that "the belief that the traditional intuitive notion of a free will divorced from causality is inflated, metaphysical nonsense, Dr. Dennett says reflecting an outdated dualistic view of the world.

Rather, Dr. Dennett argues, it is precisely our immersion in causality and the material world that frees us. Evolution, history and culture, he explains, have endowed us with feedback systems that give us the unique ability to reflect and think things over and to imagine the future. Free will and determinism can co-exist.

“All the varieties of free will worth having, we have,” Dr. Dennett said."

I think it may be well and good to say that, but explaining it is another matter. It may be that the problem of free will is, in principle, impossible to explain on a theory of philosophical materialism. If everything is ultimately reducible to matter and it various collocations, then what we call "free will" can also, in principle, be so reduced. But that seems undermining of moral responsibility as well as truth-seeking as it relates to theorizing about free will. That's the nihilism and despar thing Dennett mentions, and it follows logically from materialistic reductionism.

Finally, some admit that "free will" is a jaw-dropping "problem." "Opinions vary about whether it will ultimately prove to be physics all the way down, total independence from physics, or some shade in between, and thus how free we are. Dr. Silberstein, the Elizabethtown College professor, said, “There’s nothing in fundamental physics by itself that tells us we can’t have such emergent properties when we get to different levels of complexities.”

He waxed poetically as he imagined how the universe would evolve, with more and more complicated forms emerging from primordial quantum muck as from an elaborate computer game, in accordance with a few simple rules: “If you understand, you ought to be awestruck, you ought to be bowled over.”"
Posted by John Piippo at 10:34 AM