Just when we thought the Da Vinci Code hype was over today's aljazeera.net has a story called "Iranians Rush to Buy 'Da Vinci Code'." The article reads:
"Reza Mortazavi, a 32-year-old teacher, said: "I rushed to buy the book when I heard about the ban. Now, I am more eager to know what was written in it."
The ministry of culture has banned further printing and distribution of the book, which has sold about 30,000 copies in Farsi, after Christian clerics protested against it, according to Iranian media reports.
The manager of one of the book's two Iranian publishers said people were phoning him after the government's announcement to see if they could buy the book."

Why the Iranian interest in DVC? Because:

1) In Muslim Iran "Christianity" = "American values."
2) American values are to be condemned.
3) "Earlier this month, six Iranian Christian bishops condemned the book, saying it insulted their religion, and asked the Islamic government to ban publishers from printing it. Less than 0.2 percent of Iran's nearly 69 million people are Christian."
4) Anything that insults Christianity necessarily insults America.

For many Iranians (if not most), this is always a good thing.

Many if not most Muslim countries make the mistake of equating Christianity with America.

The reason for this is that American Christianity has largely taken on American culture and values and co-opted Jesus in support of "America."
Posted by John Piippo at 11:32 PM

More Books on Science and Religion

There's a nice article in yesterday's New York Times on the relationship between science and faith.

In The Language of God: A Scientist Presents Evidence for Belief,” Dr. Francis Collins, the geneticist who led the American government’s effort to decipher the human genome, describes his own journey from atheism to committed Christianity, a faith he embraced as a young physician. C.S. Lewis's Mere Chrsitianity was instrumental in Collins' conversion.

The Washington Post book review of Collins' book states: "Reason persuaded him that the universe could not have created itself; that humans possess an intuitive sense of right and wrong, which he calls, following Immanuel Kant, "the Moral Law"; and that humans likewise feel a "longing for the sacred." The source of this longing, the Moral Law and the universe, he came to believe, was the God described in the Bible, a transcendent Creator, Companion, Judge and Redeemer. He found additional evidence of a Creator in the eerie ability of mathematics to map the universe and in the numerous material properties -- from the slight imbalance between matter and anti-matter in the Big Bang to the binding energy within the atomic nucleus -- that seem to have been exquisitely tuned to fashion a world that would give rise to complex forms of life."

In God’s Universe, Dr. Owen Gingerich, an emeritus professor of astronomy at Harvard, tells how he is “personally persuaded that a superintelligent Creator exists beyond and within the cosmos.” Hilary Putnam comments: "In God's Universe Owen Gingerich makes the case that the probability is miraculously minute, first, that a planet hospitable to life could form after the Big Bang and, second, that once it had formed, intelligent life could develop there. Whether one agrees or disagrees, one will learn from this beautifully presented account of the relevant astronomy and physics. But that isn't all; Gingerich's reflections (as a liberal Christian) on the theological significance of all this are sensitive and deep. A truly fascinating read."

The NYT article states that "the theory of evolution says nothing about the existence or nonexistence of God." Of course this is controversial since philosophers such as Plantinga et. al. claim that evolutionary theory strongly implies methodological naturalism.
Posted by John Piippo at 9:06 PM

Linda and I left Green Lake Conference Center this morning after an extremely rich week spent with Bill Johnson and Kris Valloton of Bethel Church in Redding, California.

Bill is the author of When Heaven Invades Earth. I found him to be an extremely effective communicator and very inspirational. I’ll spend the coming weeks processing and digesting the things God spoke to me through Bill and Kris.

Here’s, for me, the major theme of last week: as followers of Jesus we are to advance the Kingdom of God, push back the powers of darkness, heal the sick, release persons from demonic captivity, and proclaim the good news of the Kingdom. What especially allows us to do this is the reality that being truly born again spiritually transforms us from earth to heaven. We now have Christ in us, the hope of glory (Colossians 1:27).

For example, when Jesus calms the storm on the lake of Galilee the reason he is calm in that storm is that, spiritually, Jesus is living in a non-earthly realm; viz., “heaven” or eternity. Medieval theologians would say tat we need to see sub specie aeternitatis, or “from the perspective of eternity. Thomas Kelly, in A Testament of Devotion (a spectacular book!), taught us to pray “see earth, through heaven.” When we, as followers of Jesus, see sub specie aeternitatis, the things of earth are seen “from heaven.” One main result of this kind of spiritual seeing is that fear of earthly consequences would be non-existent.

The medieval reference and the Kelly quote are mine, not Bill Johnson’s. My familiarity with this kind of seeing allows me to relate some historical things to Johnson’s contemporary interpretation.

Familiarity with this theme in Johnson’s theology makes sense of his approach to healing, which is: our spiritual situatedness in eternity (=, for me, dwelling in the presence of God + a variety of other biblical metaphors of spirit) is brought to bear on earthly illnesses.

I hope to take time to piece together my own understanding of such things with Bill’s approach to healing. In the meantime, I much appreciated him and Kris as persons and am thankful for their ministry, which strikes me as quite Real-Jesuslike.
Posted by John Piippo at 1:44 AM

Gazzaniga's Ethical Brain and Free Will 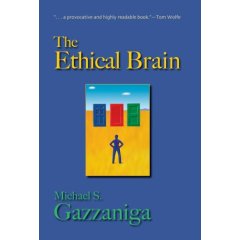 Michael Gazzaniga, the director of the Center for Cognitive Neuroscience at Dartmouth College, has written a book called The Ethical Brain. Dr. Andrew Newburg of the University of Pennsylvania reviews the book here.

One things Gazzaniga makes clear is that if moral choices are ultimately reducible to neurophysiology of the brain, then persons are not ultimately responsible for such choices. That is, it seems nonsensical to condemn immoral behavior and praise moral actions.

Newburg writes that “the “insanity” plea hinges on the notion that the brain, not the individual, is responsible for certain types of deviant behavior… There is even some evidence suggesting that the brain does not have a full sense of free will, so it remains to be seen whether anyone can really be held responsible for anything at all.”