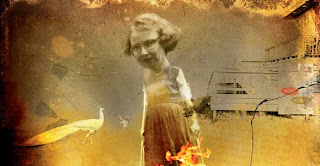 Thanks to our friend Will Peebles,  Steve Belkoff and I were, years ago, introduced to Flannery O'Connor. I can't speak for Steve, but I know I had a difficult time reading O'Connor. Will, however was familiar with her and is a very good teacher. What happened was that a world of Christian spirituality was opened up to me in a brilliant fictive way that nonfictive discourse cannot.

O'Connor was a genius. Terry Teachout's "Believing in Flannery O'Connor" sweeps me back to the 1980s whem Will, Steve, and I read, I think, everything O'Connor ever wrote. Every week I came away stunned by the Christ-haunted world she described. I hope one day to return to Wise Blood, A Good Man Is Hard to Find, and The Violent Bear It Away, among many others. I think her work will have more to say to me now than back then, having been in ministry with people for the past 40 years. I sometimes wonder, "What the heck is going on in this crazy world, and what do I think I am doing in it." "Am I, are we, is the Church, making any real difference?" I think yes, and sometimes I am John the Baptist in prison sending out friends to ask Jesus if he is still the One.

To furrther explain. I teach logic in our local college. I love logic and try my best, at times, to think logically, to reason about life. But life, itself, is not logical. I'm talking Pascal-language, who said, "The heart has reasons, that reason cannot know." Amen. Sometimes things turn out well that logically should never have. And vice versa, with things turning out hellishly that were preceded by all of heaven's reasoning. O'Connor shows how Jesus-faith finds its way into our crazy world and latches on to people. We see the outrageously redemptive work of God who is able to take the bitterest lemon and squeeze out a lemon smoothie. The steel nets of logic cannot capture all of reality, and I suspect logic cannot capture the human heart which is, I think, what this whole mess is about anyway.

Now I think I'll go back and re-read about The Holy Church of Christ Without Christ in Wise Blood.
Posted by John Piippo at 1:15 AM