The Myth of Objectivity 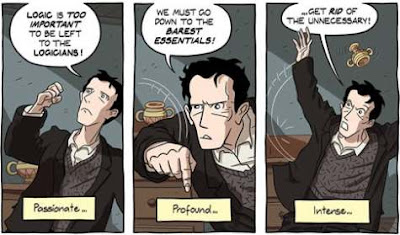 In a recent online dialogue someone criticized a theistic argument I was making by asking this: "Because you are a pastor, are you able to teach your philosophy courses from an unbiased, objective viewpoint?"
My answer was: "Of course not."
Everyone comes from a bias, a "prejudice" (in Hans-Georg Gadamer's sense, as in his Truth and Method). No one teaches or speaks from total objective neutrality. In fact, the myth of objectivity is itself indebted to a worldview such as, e.g., Cartesianism. The idea of objectivity is a certain kind of epistemological bias. The unexamined acceptance of the myth of objectivity is the soil in which ad hominemn circumstantial fallacies grow.
Earlier this evening I spoke with my Logic class about this while explaining informal fallacies 1-5 in Hurley's A Concise Introduction to Logic. The use of ad hominem circumstantials to discredit arguments is huge in cultural discourse. But, in logical argumentation, the fact that I am a Christian theist is fundamentally irrelevant to any arguments I make for the existence of God. The same goes for the atheist who argues against God's existence. Such circumstantial things are only of sociological, not logical, interest, and contribute nothing to the task of evaluating arguments. Arguments are a-cultural entities.
Hurley gives the example of the Dalai Lama making his logical argument that China needs to get out of Tibet. Does the Dalai Lama want China out of Tibet so he can return to Tibet as the leader of Tibetan Buddhism? Of course he does. Does his passion and bias towards this in any way invalidate his argument? Of course it does not. This is a new concept for most of my college students to grasp. They think that their professor should be unbiased as regards the subject matter so as to be able to teach it from an objectively neutral position, and that this will make for more effective teaching. This expectation may be equivalent to the expectation that a bachelor should be also married. I'll add that stating one's epistemic and hermeneutical biases make teaching more interesting and helpful. Put negatively, I want to gag whenever I hear some teacher claim to be epistemically unbiased.
Here's some Gadamer-stuff on "pre-judice" from Stanford Encyclopedia of Philosophy: "The prejudicial character of understanding means that, whenever we understand, we are involved in a dialogue that encompasses both our own self-understanding and our understanding of the matter at issue. In the dialogue of understanding our prejudices come to the fore, both inasmuch as they play a crucial role in opening up what is to be understood, and inasmuch as they themselves become evident in that process. As our prejudices thereby become apparent to us, so they can also become the focus of questioning in their own turn." (See "The Positivity of 'Prejudice'.")
This evening I told my class evening that:
1) They all have a cognitive bias (pre-judgment);
2) Most of them do not know what their cognitive bias is; and
3) philosophy as meta-philosophy concerns adjudicating between cognitive prejudicial structures.
Add to this the claim that Logic is transcendental in Kant's sense; viz., lying at the base of experience. (See, e.g., Logicomix: An Epic Search fo Truth, in which Bertrand Russell et. al. try to find the logical foundations of mathematics.)
In summary:
1. No person experiences or views reality from some objectively neutral vantage point.
2. Ad hominem circumstantial informal fallacies make the logical error of rejecting or accepting an argument on the basis of the arguer's circumstances (such as "character" in an ad hominemn abusive fallacy; or pre-existing beliefs; personal behaviors; personal desires; and so on).
3. One can adjudicate between epistemic or noetic (Plantinga) frameworks.
4. Logic itself may be a-cultural. (See below)
5. The existence of logic may itself provide a reason to accept theism as the better explanation for this than atheism. (See J.P. Moreland's recent Consciousness and the Existence of God; Victor Reppert's C.S. Lewis's Dangerous Idea; et. al.)
Re. 4, William Lane Craig and J.P. Moreland write: "Every one of us already employs the rules of argumentation whether we realize it or not. For these rules apply to all reasoning everywhere, no matter what the subject. We use these rules unconsciously ecvery day in normal life." (Craig and Moreland, "Argumentation and Logic," in Philosophical Foundations for a Christian Worldview, 28. Note that, whereas the above quote points to the epistemological bedrock-quality of logic, in this book Craig and Moreland do not address the meta-logical foundations of logic)
Posted by John Piippo at 12:13 AM