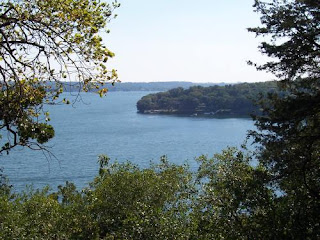 A few summers ago, at our conference in Green Lake, Wisconsin, our speaker was Dean Sherman of Youth With a Mission. At one point Dean was talking about life after death. He said, "I don't want heaven to have streets of gold. I want heaven to be like Green Lake." Me too. I'll take the beauty of God's creation over anything when it comes to thinking of heaven.

In the book of Revelation the heavenly city ius described in this way:

"The wall was made of jasper, and the city of pure gold, as pure as glass. The foundations of the city walls were decorated with every kind of precious stone. The first foundation was jasper, the second sapphire, the third chalcedony, the fourth emerald, the fifth sardonyx, the sixth carnelian, the seventh chrysolite, the eighth beryl, the ninth topaz, the tenth chrysoprase, the eleventh jacinth, and the twelfth amethyst. The twelve gates were twelve pearls, each gate made of a single pearl. The great street of the city was of pure gold, like transparent glass." (Rev. 21:18-21)

I have always taken this description as symbolic of something so phenomenal that words fall short. Re. this C.S. Lewis, in Mere Christianity, wrote:

"There is no need to be worried by facetious people who try to make the Christian hope of 'Heaven' ridiculous by saying they do not want 'to spend eternity playing harps'. The answer to such people is that if they cannot understand books written for grown-ups, they should not talk about them. All the scriptural imagery (harps, crowns, gold, etc.) is, of course a merely symbolical attempt to express the inexpressible. Musical instruments are mentioned because for many people (not all) music is the thing known in the present life which most strongly suggests ecstasy and infinity. Crowns are mentioned to suggest the fact that those who are united with God in eternity share His splendour and power and joy. Gold is mentioned to suggest the timelessness of Heaven (gold does not rust) and the preciousness of it. People who take these symbols literally might as well think that when Christ told us to be like doves, He meant that we were to lay eggs."
Posted by John Piippo at 9:11 AM