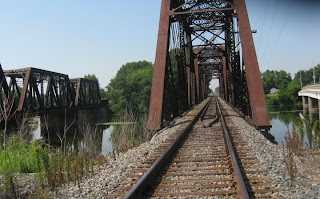 John Berger writes: "The poverty of our century is unlike that of any other. It is not, as poverty was before, the result of natural scarcity, but of a set of priorities imposed upon the rest of the world by the rich. Consequently, the modern poor are not pitied but written off as trash. The twentieth-century consumer economy has produced the first culture for which a beggar is a reminder of nothing." (Keeping a Rendevous, 234) Richard Stearns cites this Berger quote in The Hole In Our Gospel (95).

I just got off this phone with a man named Lee, whom I have befriended here in Monroe. He now lives under a bridge. I'm taking him out for dinner tomorrow. His economic plight is so huge, and his struggles so systemic, that I feel overwhelmed by his situation. I have told him that there is a God and that this God loves him. It's a tough one for him to grasp.

"Our desire is not that others might be relieved while you are hard pressed, but that there might be equality. At the present time your plenty will supply what they need, so that in turn their plenty will supply what you need. Then there will be equality, as it is written: "He who gathered much did not have too much, and he who gathered little did not have too little."

But that there might be equality. Lee and I are not equal, at least not economically and provisionally. Tomorrow morning I'll be shopping for the food I will prepare for our Thanksgiving meal. He, on the other hand, will be waking up under the bridge. Am I to be satisfied with this? I think not. I know Jesus is not.

Stearns quotes a speech by Jimmy Carter, where Carter says: "Tragically, in the industrialized world there is a terrible absence of understanding or concern about those who are enduring lives of despair and hopelessness. We have not yet made the commitment to share with others an appreciable part of our excessive wealth. This is a potentially rewarding burden that we should all be willing to assume." (In Stearns, 99)

One of my Jesus-friends, Jon, picked this man up today and spent some time with him. I know this because Jon called me and said, "There's someone here who wants to talk with you." It was Lee! I felt so grateful for Jon, and was glad to talk with Lee. Lee says he's leaving Monroe on Saturday for the east coast. Tomorrow may be the last day I see him.
Posted by John Piippo at 3:55 PM