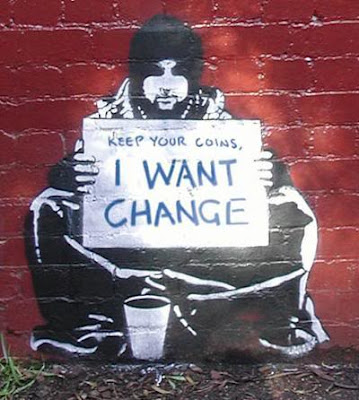 How prophetic, discerning, and relevant was Thomas Merton? Over 40 years ago he wrote this:
"We on the contrary live in an irreligious post-Christian world in which the Christian message has been repeated over and over until it has come to seem empty of all intelligible content to those whose ears close to the word of God even before it is uttered. In their minds "Christian" is no longer identified with newness and change, but only with the static preservation of outworn structures.” (From Peace in the Post-Christian Era, by Thomas Merton. Orbis Books; Maryknoll, New York. 2004. p.127-28)
Today this condition has worsened. The resistance of people who call themselves "Christians" to the moving of the Spirit results in intra-church fighting between the many who want to keep "church" just like it was years ago for them and the very few who want to be part of a movement. Real movements are never static. Real Christianity is a movement, not an institution. The institutionalizers have taken over a lot of "churches." The result is an impotent, boring, irrelevant playground for the powers of darkness. Who would ever want to be a part of something like that?
Posted by John Piippo at 11:57 PM