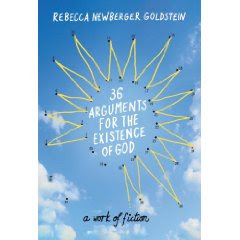 Rebecca Goldstein's forthcoming 36 Arguments for the Existence of God: A Work of Fiction starts with a whimper. Her argument #1 is "The Cosmological Argument." She fails to consider what is, arguably, the strongest version of the cosmological argument; viz., the kalam cosmological argument for God's existence. The kalam argument obviates the criticism that postulating God as the cause of the universe still leaves us with the question of who or what caused God. The kalam argument does not state that "everything that exists has a cause" but that "everything that begins to exist has a cause." If God's exisenc is necessary (i.e., God did not begin to exist), then her Flaw #1 below does not apply. Her Flaw #2 is irrelevant if, on the kalam argument, we understand "cause" broadly as an explanatory reason for any event X that begins to exist. As regards Goldstein's "Comment" it is true that an underlying question for all forms of the cosmological argument is the question "Why is there something rather than nothing?" But her quote from  Sydney Morgenbesser, while cute, is irrelevant to the discussion. The real question has to do with science's desire to explain events that begin to exist; such as, e.g., wanting to explain design in nature by means of natural selection. Since our universe did begin to exist (it has an age, and whatever has an age has a beginning; plus the idea that if our unvierse did not begin to exist then it has always existed, which is incoherent) the kalam argument intends to give a possible and plausible answer to the question "What caused the universe to exist?, and not, fundamentally, "Why is there something than nothing?"

Goldstein's formulation of the fine-tuning argument is weak and seems to not comprehend strong versions of this argument and their use of inference to the best explanation.

Goldstein seems more philosophically sophisticated than Richard Dawkins. But if she is going to give serious objections to theistic arguments she needs to be familiar with and address current formulations of those arguments.

Here, from edge.org and her coming book, is Argument #1, as she presents it and objects to it.


1. Everything that exists must have a cause.

3. Nothing can be the cause of itself.

4. The universe cannot be the cause of itself (from 3).

6. God is the only thing that is outside of the universe.

FLAW 1: can be crudely put: Who caused God? The Cosmological Argument is a prime example of the Fallacy of Passing the Buck: invoking God to solve some problem, but then leaving unanswered that very same problem when applied to God himself. The proponent of the Cosmological Argument must admit a contradiction to either his first premise — and say that though God exists, he doesn't have a cause — or else a contradiction to his third premise — and say that God is self-caused. Either way, the theist is saying that his premises have at least one exception, but is not explaining why God must be the unique exception, otherwise than asserting his unique mystery (the Fallacy of Using One Mystery To Pseudo-Explain Another). Once you admit of exceptions, you can ask why the universe itself, which is also unique, can't be the exception. The universe itself can either exist without a cause, or else can be self-caused . Since the buck has to stop somewhere, why not with the universe?

FLAW 2: The notion of "cause" is by no means clear, but our best definition is a relation that holds between events that are connected by physical laws. Knocking the vase off the table caused it to crash to the floor; smoking three packs a day caused his lung cancer. To apply this concept to the universe itself is to misuse the concept of cause, extending it into a realm in which we have no idea how to use it. This line of skeptical reasoning, based on the incoherent demands we make of the concept of cause, was developed by David Hume.

COMMENT: The Cosmological Argument, like the Argument from the Big Bang, and The Argument from the Intelligibility of the Universe, are expressions of our cosmic befuddlement at the question: why is there something rather than nothing? The late philosopher Sydney Morgenbesser had a classic response to this question: "And if there were nothing? You'd still be complaining!"
Posted by John Piippo at 1:47 AM