No More Minarets in Switzerland 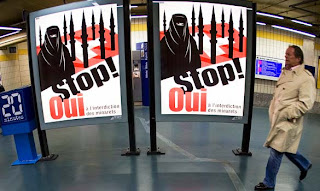 ("Stop the Minarets" poster in Switzerland)

Watch this in Switzerland on the vote taken Sunday to ban future building of Islamic minarets. The London Times says: "Swiss voters defied their Government and clerics yesterday and approved a ban on building minarets — reflecting an alarming hostility to a rising Muslim minority."

Al-Jazeera reports:  Supporters of the ban say minarets represent the growth of an alien ideology and legal system that have no place in the Swiss democracy. "Forced marriages and other things like cemeteries separating the pure and impure - we don't have that in Switzerland, and we do not want to introduce it," Ulrich Schlueer, co-president of the Initiative Committee to ban minarets, said.

Just as some Christians have as a goal to "Christianize" a nation, so do Islamists desire to "Islamify" a nation and establish sharia law. There's going to be a battle over religious freedom in Switzerland, a land known for openness and tolerance.

The Times says, "The Swiss political world is worried at the prospects of a worldwide Muslim backlash of the kind that hit Denmark after a newspaper published cartoons of the Prophet Muhammad."


The minaret is a powerful symbol when introduced into a Western country. A cross on top of a church building, on the other hand, is culturally harmless. It it should also be a sign of revolution, of a kingdom invading this world and turning it upside-down.
Posted by John Piippo at 1:07 AM