The Smart-Alecky Nihilism of the Coen Brothers 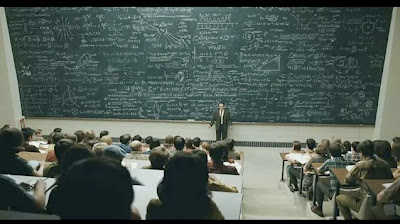 On Friday evening Linda and I went to see the new Coen brothers movie "A Serious Man." It's a well-reviewed movie but does not promise to make lots of money because it's a serious movie dealing with some serious issues and it's seriously very funny (as opposed to, e.g., "Elf," which is neither serious nor funny). We saw it at the Michigan Theatre in Ann Arbor. Ann Arbor was packed out Friday night because Robin Williams was playing at Hill Auditorium. We had a nice meal at the Red Hawk Grill. This is the second time we've eaten there. We like the atmosphere and it's got an interesting menu.
"A Serious Man" is a modern-day take on the biblical book of Job. It's 1967, the year Linda and I graduated from high school. The main character is Larry Gopnik, a Minnesota university physics professor whose entire life is falling apart. I mean absolutely everything is going down in a subtle horror-film way that puts a smile on your face as you watch this series of events. Larry spends his time trying to get answers from people and, ultimately, from God. He meets with two rabbis and fails in his attempt to meet with a third rabbi who is said to be "the One," appears to be doing nothing, but spends his time just thinking. The rabbi scenes are hilarious, as the first rabbi suggests Larry get over his marital, financial, neighbor, children, and medical issues by finding God in the mystery of a quite-ordinary parking lot. The Jewish-style story the second rabbi tells is seriously funny and ends up meaning nothing. Larry needs help. The rabbi tells a story. That's it. Very, very funny. The look on Larry's face (played by Michael Stuhlbarg) is amazing in its disbelief and confusion. The cloud-of-glory aura surrounding the third rabbi, an ancient-of-days character, is finally revealed as the rabbi quotes Jefferson Airplane's "Somebody to Love" to Larry's marijuana-saturated son who was just bar-mitzvahed. Then, the old rabbi gives the stuporific kid a gift which, I must admit, was pretty cool and insightful.
Now to the basic question: is there a God who responds to our cries for help? Is there, ultimately, Somebody to love, and Somebody who loves? "What," wonders Larry, "is God trying to tell me?" God gives no answer. The rabbis are total imbeciles who exhale their vacuous numinosities. And, all this is (really) funny. A.O. Scott calls it "smart-alecky nihilism."
The Coen brothers have taken the baton from fellow Jew Woody Allen, who took the baton from the Lutheran nihilist Ingmar Bergman, none of whom took the baton from Job who, in spite of all that happened to him, did not carry a torch for nihilism. The three rabbis should have known better. I'd like a crack at helping Larry, since I meet him every week.
Posted by John Piippo at 6:18 PM