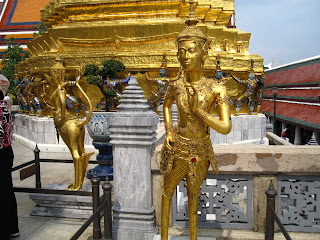 (In the compund of the Grand Palace, Thailand)

Siddharth Kara, in Sex Trafficking: Inside the Business of Modern Slavery, argues that Theravada Buddhism promotes female inferiority and thus is a crucial factor "in the evolution of the sexual exploitation of women, as a business, in Thailand." (173) Why?

Ninety percent of Thai citizens are Theravada Buddhists. (173) Theravada Buddhism is much stricter than Mahayana Buddhism, and relegates the achievement of nirvana to monks only, and not to lay people, and especially not to women. "A Theravada Buddhist must first ascend to the level of monk before nirvana is possible." (173)

For Theravada Buddhists, "the world ascribes to a struct hierarchy, ranked by karma." (173) "Karma" is the consequence of a persons actions and intentions, a weighing of good deeds against bad deeds. "Positive or moral actions acfrue positive karma, and negative or immoral actions accrue negative karma. At the end of life, the sum of these two results carries an imbalance." (173) The level of being one is reborn into is a consequence of one's karma. Kara writes: "Positive [karmic] residue leds up the ontological hierarchy; negative residue leads down." (173-174)

"Manifestations of wealth and power are evidence of the accumulation of positive karmic merit in past lives, wheras manifestations of poverty, disease, female gender, or slavery are evidence of past negative deeds. In this way, Thai people reconcile themselves to inequality, and the only way for the downtrodden to be reborn into better shoes is to abide their position dutifully and to accrue positive karma, even if that position entails slavery." (174)

Kara states that, "While such beliefs are more entrenched in rural Thailand than in Bangkok, the culture of female inferiority nevertheless pervades the capital... Women are spiritually and civically inferior in Thailand, and this subordination has been most keemly (and not accidentally) manifested through centuries of systematized sexualy exploitation by men, within the country's longstnading and well-developed prostitution industry." (174)

Arguably, a similiar kind of social stratification (ontological hierarchy) occurs in every culture. The same kind of hierarchy was in place in the first-century Jewish world in which Jesus lived. New Testament scholar Joel Green, commenting on Luke 1:46-55, shows the hierarchy Mary lived in and out of which her song came. It is (Green, 60):
Women, generally, are on the low end of this hierarchy. Rarely do they function in the roles of ruler, governor, priest, or merchant. Primarily a woman's role in first-century Judaism was to bear children. (Green, 61) The barrenness of Elizabeth, for example, caused her to suffer disgrace among her people, thus giving her "low status honor." (Green, 61) Of Mary Green writes: "It is as if she were an orphan: no family background is provided; she is betrothed to Joseph but as such has not entered into his house or in herited his status. Yet, she is favored by God (Luke 1:28, 30), though for no apparent reason other than God's gracious choice. Like Elizabeth, in this social world, Mary undergoes a startling transposition of status." (Green, 61)

When Mary, in amazement, sings "My soul glorifies the Lord and my spirit rejoices in God my Savior,
for he has been mindful of the humble state of his servant," we enter into the alternative world of the "upside-down Kingdom of God." We have, from God, a great "status reversal"; the Great Reversal. God comes for the lowly, the rich and proud of this world will be brought down ("humbled"), and the hungry and lowly will be exalted and blessed.

Personally, I have seen Jesus-followers in Thailand and in my community of Monroe who ignore the prevailing ontological hierarchy and "descend into greatness" as defined by God. Surely this is good news for all, and is especially felt by this world's many who rank at the bottom of the social pecking order.
Posted by John Piippo at 12:05 AM