You Can't Escape the Metanarrative 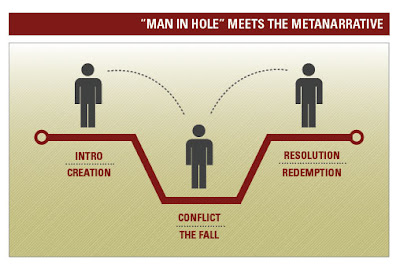 C.S. Lewis wrote:
"The waking world is judged more real because it can contain the dreaming world; the dreaming world is judged less real because it cannot contain the waking one. For the same reason I am certain that in passing from the scientific points of view to the theological, I have passed from dream to waking. Christian theology can fit in science, art, morality, and the sub-Christian religions. The scientific point of view cannot fit in any of these things, not even science itself. I believe in Christianity as I believe that the Sun has risen, not only because I see it, but because by it I see everything else." ("Is Theology Poetry," in The Weight of Glory)
I think there are a number of directions we can go with this quote. First, note that this is the kind of thinking that makes postmoderns feel like they've just contracted the swine flu. I'll explain more below. Second, I think it would be fruitful to compare Lewis here with Alvin Plantinga's work on noetic frameworks and warranted belief, or tie what Lewis is saying in with the logic of what is called "inference to the best explanation." Third, we could also relate what Lewis is saying, I think, to N.T. Wright's work on the authority of the Bible as expressed in his wonderful little book The Last Word: Scripture and the Authority of God--Getting Beyond the Bible Wars. Here's a little bit about how Wright furthers the kind of thing Lewis is saying.
For Wright, the Bible tells a "remarkably consistent story about God’s plan to restore the world back to God." Despite its many literary genres, the Bible can as a whole be described as “story,” or narrative. It is not primarily a “list of rules” nor a “compendium of true doctrines,” though the texts do include rules and doctrines. When Wright says “We must let the Bible be the Bible,” he means to say that, primarily, the Bible is "narrative." Pause here please. The biblical story stakes a claim to authoritativeness primarily as the Grand Narrative, the meta-narrative, by which all other sub-narratives are understood.
Wright says that we must talk about "the biblical narrative" and then ask the question, "Does the biblical narrative best explain the way things are?" Wright’s answer is: yes. Therefore the Bible is not merely a human story that reflects the beliefs and experiences of ancient communities. It functions authoritatively today. As Lewis, who was very fond of narrative himself, might say: "By it I see everything else." The biblical narrative a meta-narrative; i.e., a transcendent narrative that encompasses, e.g., the scientific narrative, whereas the scientific narrative does not encompass the biblical narrative. When Lewis says "the scientific point of view cannot fit in any of these things, not even science itself," this means that the scientific point of view cannot be the metanarrative by which we view all things.
Both Lewis, and Wright, are questing for a metanarrative that makes sense of all experience. "Science" is not that metanarrative and cannot in principle be that metanarrative precisely because "value" is not contained therein.
Now note that this kind of talk essentially, fundamentally, conflicts with current postmodern thinking. Lewis and Wright call us away from the postmodern rejection of metanarratives (see, e.g., Jean Francois Lyotard) back to "grand narratives" that explain all of life. Because we live in postmodern times, we must realize that there is increasing suspicion of the possibility of a grand narrative which, by it, "we see everything else" (Lewis). Indeed, this postmodern idea has taken such root in North America and Europe that it now largely functions as the prevailing controlling narrative, especially in the culture of the university.
Wright is resurrecting the hope of a grand narrative. That, essentially, is what the Bible is and therein, essentially, lies its authority. The Judeo-Christian Scriptures were formed in a grand-narrative world. The question then becomes: how do we adjudicate between competing meta-narratives?
First, it seems important to understand what the options are, and then, what each one claims. For example, in preparation for my trip to Bangkok next week I am immersing myself in Theravada Buddhism studies so as to better understand it's meta-narrative role. My entrance into that competing meta-narrative world will, hopefully, give me a greater understanding of the Buddhist claim to interpret all of reality.
To help us understand the Judeo-Christian-theist grand narrative Wright speaks of Christian Scripture as a "five act play." He says: “The story of the Bible, and the power that it possesses, is a better story than any of the power games that we play in our world. We must tell this story, and let it exercise its power in the world. And that is the task of the whole church.”
I am now thinking of Jesus' profound claim of John 14:6 - "I am the way, and the truth, and the life; no one comes to the Father but by me." If that's not an invitation to dwell in a grand narrative I don't know what is! That enrages the postmodernist because it's so marginalizing. What can we say?
Here I would suggest that postmodernism does not itself escape meta-narrativistic thinking and, ipso facto, also marginalizes. The postmodernism of, e.g., a Lyotard, rejects grand narratives in favor of Wittgensteinian "little narratives." "By fragmenting life into a thousand localized roles, each with their particular contexts for judging actions and knowledge, we avoid the need for meta-narratives." (see here) But I need a metanarrative. I need a "Sun by which to see all things." And I am suspicious of the postmodern claim that it has escaped the marginalizing results it so despises. By its Sun, I see very little.
Posted by John Piippo at 7:38 AM