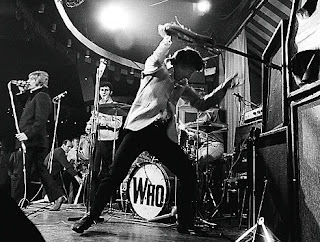 (Peter Townshend of "The Who," driving his guitar through a fake amplifier.)

Linda and I just watched "The Who" on the Super Bowl Halftime show. Way, way, way back in the 1960s I saw The Who in concert. The rumor was they destroyed their instruments during their concerts. I went anticipating this to happen and was, frankly, disappointed when, under the cover of fog machinery, fake drum sets and amps were brought on stage and, subsequently, "destroyed." Beware of any band that destroys fake instruments.

Why was "The Who" playing at the Super Bowl? Why not, instead, Meat Loaf, who played before a near-total black audience at an NBA All-Star game some years ago. Actually, that was the only halftime show I remember in all my life precisely because it was so supremely anachronistic and unglorious. Analagously, bringing The Who on America's biggest stage is an equally amazing feat of out-of-touchness. We're talking about an archaeological moment as these ancient songs were uncovered before a billion people who, if they were listening, cried out for interpretation. When The Who stepped onto the stage America's youth looked to their grandparents and asked, "Who?"

Their playing was bad. And, BTW, every guitar player knows that Peter Townshend's windmill strumming only requires an uninjured rotator cuff. As Townshend's shirt elevated during every windmill to reveal his belly I found myself blushing, for his 60-something belly was seen as everyman's 60-something belly, to include my own. Had they begun to destroy the stage I would have felt vindicated, and proudly announced to the kids of today "See what we had way back when?"

Yes, back when TVs were black-and-white, phones had cords, and we wore madras shirts, I listened to "Tommy," the pinball wizard. But I haven't listened to a Who song in 40 years. Today, in a galaxy far from that one, with all the musical choices our world has to offer, Why the Who?
Posted by John Piippo at 8:40 PM