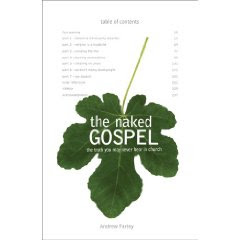 Today I began to read Andrew Farley's The Naked Gospel: the truth you may never hear in church. I like what I'm reading in ch. 1 - to be released from performance-oriented, striving, folk Christianity. Yes! "The naked, real Gospel is a lot better than any of us realize." (15) Yup.

Ch. 2 - "What's going wrong in churches today?...  I believe it's our substance, not our structure, that is leaving so many stagnant and dissatisfied. A church may have polished programs, well-trined staff, and dynamic speakers. But content is what people walk away with." (26-27) That sounds right to me.

Ch. 3 - "Striving" to please God is not the answer. Farley asks, "What do Saul of Tarsus, Martin Luther, and Mother Teresa have in common? They all appear to have wrestled under a religious system that brought them no enduring sense of satisfaction or accomplishment, but only misery.... Having exerted more effort than nerly any of us will ever expend, they probably found themselves saying, "How much is enough? When will it end?... When do I get to relax and enjoy? There's got to be another way." OK. I'm with Farley that striving our faces off "for God" is not the message of the Real Jesus.

Ch. 4 - We're getting at the heart of Farley when he writes: "It's crucial to realize that the law and Jesus just don't mix... [T]he law discredits Jesus as priest. For this reason, the writer of Hebrews writes, "When the priesthood is changed, the law must be changed also" (Hebrews 7:12)." (39) If Jesus is your priest, then acc. to Farley there's no room for the law in your life.

We're under a New Covenant. "Jesus Christ is the author and guarantee of something totally new and revolutionary." (40) I agree. "If we want to understnad how God relates to us, we should look to the New." (40) I agree. I like what Farley writes next: "The New is unlike anything before, and it solves a serious problem - our failure to remain faithful. Whatefer the New is, it somehow causes people to remain faithful, even when their own strength fails them." (41)

With the New, God's desires are written inside of us. I pause here. In talking with Eide Alawan of The Islamic Center of America, he was explaining why, in Islam, it is good that women wear body and head coverings. Eide told me that he needed this, because otherwise he would find it hard to control his lustful male urges. My thought was this: viz., that Christianity differs in this way from Islam in that God wants to change the desires. If this happens, the clothing laws will not be necessary. When the Jesus-law of love happens, there's not need for the 10 commandments because, of one loves as Jesus loves, then one will not, e.g., covet what his neighbor has, since that is unloving.

Ch. 5 - The book of Hebrews is key for Farley. "Essentially, it's a lengthy argument for abandonment of the Old and adoption of the New... Hebrews alone can put to rest many of the issues dividing Christians today." (46) Hebrews and other NT letters shout in unison - "Jesus plus nothing."

Ch. 7 - I like this point, and think it is correct. Farley writes: "In the United States, some Christians fight for the Ten Commandments to be posted on our public buildings. We say that we don't want our society to lose its Christian roots. But Christianity was nevfer rooted in the law, not even the Ten Commandments." (53)

The ministry of the Ten Commandments was "a ministry designed to condemn." (55)

Here we are, I think, at the center of Farley's argument. He asks, rhetorically, "doesn't God want us to kep the law? If we take this to its ultimate conclusion, then wouldn't the Holy Spirit motivate is to eat pork," etc.? "Is this the intention of the Spirit of God in your life? Think about it." (56)

Farley admits some people get very, very upset at him when he talks like this. But I do think he is on target. Here's the bullet points, since I'm putting the book down for the evening.