The Noetic Effects of Sin 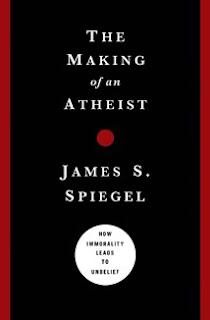 Sometimes I make a post simply for my own sake; e.g., to reference something I am interested in and may want to get into later. So, here I am reading an interview with Taylor University philosophy professor James Spiegel on his new book The Making of an Atheist: How Immorality Leads to Unbelief.

Spiegel's thesis is: the cause of atheistic belief is that "sinful behaviors cloud and distort cognition... [because] volitional factors impact belief-formation." Spiegel is especially influenced by the work Alvin Plantinga has done in his Warranted Christian Belief. This has to do with the "noetic effects of sin"; viz., that one's noetic framework either illuminates or darkens one's experience of God.

Spiegel states how difficult it is for the noetic framework of atheism to discuss evil. "The very notion of “evil” presupposes a standard for goodness which atheism cannot provide. Any notion of evil or, for that matter, how things ought to be, whether morally or in terms of natural events, must rely on some standard or ideal that transcends the physical world. Only some form of supernaturalism, such as theism, can supply this. So to the extent that atheists acknowledge the reality of evil, they depart from their own commitment to naturalism."

Spiegel discusses the controversial thesis of Paul Vitz; viz., the idea that many atheists are that way because of broken relationships with their fathers. Spiegel says: "In his provocative little book, The Faith of the Fatherless, psychologist Paul Vitz surveys the major, and many of the minor, atheist scholars of the modern period. He finds that the one thing these thinkers—e.g., Hobbes, Voltaire, Hume, Nietzsche, Russell, Freud, Sartre, etc.—have in common is a severely broken relationship with their father. In accounting for atheism, Vitz turns the tables on Freudians who aim to explain away theistic belief as a cosmic projection of one’s father image. In fact, the opposite seems to be the case: atheists’ broken father relationships prompt their refusal to recognize the reality of God."

Surely any strong atheist will protest, even finding Spiegel's thesis silly. But the Plantingian point that is being made is that, of course it will appear silly given one's naturalistic noetic framework. The real issue is that of adjudicating between such fraemworks.
Posted by John Piippo at 11:42 PM