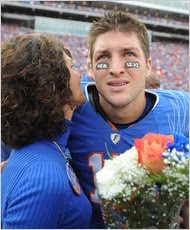 The most-talked about commercial to be run during Sunday's Super Bowl is Focus on the Family's what features Tim Tebow and his mother Pam. It's called “Celebrate family, celebrate life.” It's pro-life, anti-abortion. Some are protesting against CBS for airing it, the Super Bowl supposedly being no place to debate controversial issues. To which I say: why not? In our era of free speech, thanks go to CBS for running it.

Logically, abortion is the taking of a person's life against their will. Prof of Philosophy Francis Beckwith's argument against abortion is, I think, logically unassailable. It's rigorous, and points out the many logically fallacious attempts to discredit it. Here's a summary I have previously posted, with a few editing changes.

This is not a religious argument, but a logical argument. No appeal to religion needs to be made.

By “full-fledged member of the human community” is meant that the conceptus[3] is as much a bearer of rights as any human being whose rights-bearing status is uncontroversial, like you or me. As Beckwith says, “the unborn entity is entitled to all the rights to which free and equal persons are entitled by virtue of being free and equal persons.” “Full-fledged member of the human community” cannot mean something like “viability,” since then we have two problems:

1) the arbitrariness of deciding who’s a full-fledged member and who’s not; and

2) the odd philosophical idea that there is suddenly a “moment” (call it time ‘t’) when the conceptus/fetus/inborn child becomes a person, which means at time ‘t-minus-1 second’ it was not. “Abortion advocates argue that the unborn entity is not a person and hence not a subject of moral rights until some decisive moment in fetal or postnatal development.” (Beckwith, 130) Such a position is incoherent and fraught with philosophical problems.

“Virtually no one disputes – including leading defenders of abortion-choice – that every mature human being was once an adolescent, a child, an infant, a baby, a newborn, a fetus, and an embryo.” (131) But the abortion advocate argues that it is morally permissible to end a human being’s life at the embryo stage of human life. How is this possible? Beckwith says they argue that not all human beings are equally intrinsically valuable (IV) because some do not have the present capacity to exhibit certain properties or functions that would make them IV. (130) Thus, the fetal self is not “intrinsically valuable.”

Beckwith holds to a “substance view of persons.” This means that a human being “is intrinsically valuable because of the sort of thing it is and the human being remains that sort of thing as long as it exists”. That is, an individual “maintains absolute identity through time while it grows, develops, and undergoes numerous changes”. To use another example, the term “universe” refers to one entity that goes through various stages. The universe at t + 1 second, though much smaller and far more inchoate then the universe now, was still at that time as much “the universe” as it is now. So, the term “universe does not suffer from vagueness. It is in precisely that sense that “person” does not suffer from vagueness as well.

Various functions and capacities, whether fully realized or utilized do not constitute a person. Thus a human being is never a potential person, but is always a person at different stages of development, whether potential properties and capacities are actualized or not.

WHAT ABOUT THE FOLLOWING POPULAR ARGUMENTS FOR ABORTION CHOICE?

Beckwith says they many commit the informal logical fallacies of “appeal to pity” and “begging the question.”
“An argument from pity is an attempt to show the plausibility of one’s point of view by trying to move others emotionally, although the reasonableness of the position stands or falls on the basis of other important factors.” Here are some arguments from pity:

Argument from the dangers of illegal abortions

We can’t minimize the fact that there are tragic circumstances, like a poor woman with four small children who becomes pregnant by her alcoholic husband.“But once again we must ask whether the unborn entity is fully human, for hardship does not justify homicide.” (98)For example, if I knew that killing you would relieve me of future hardship, that’s not sufficient justification for me to kill you.

Argument from the unwanted child

This argument, again, begs the question.Because only if we assume that the unborn re not fully human does this argument work.It is extremely difficult to argue that the value of a human being depends on whether someone wants or cares for that human being.

Argument from the deformed and handicapped child

First, if this argument succeeds in showing that abortion is justified if a woman is pregnant with a deformed or handicapped fetus, it only establishes the right to abort in those kind of situations.But this argument again begs the question. “For if the unborn are fully human, then to promote the aborting of the handicapped unborn is tantamount to promoting the execution of handicapped people whoa re already born.”[4]Of course having a handicapped child can be a terrible burden. “But it is important to realize that if the unborn entity is fully human, homicide cannot be justified simply because it relieves one of a terrible burden.” (102)

Argument from interference in career

Again… this begs the question. “For what would we think of a parent who kills his two-year-old because the child interfered with the parent’s ability to advance in his occupation?” (104)

Argument from rape and incest

This is a horrible thing, of course.Note: this argument is not relevant to the case for abortion on demand.Note also this: “the unborn entity is not an aggressor when its presence does not endanger it’s mother’s life (as in the case of a tubal pregnancy). It is the rapist who is the aggressor. The unborn entity is just as much an innocent victim as its mother.” (105-106) Again… this argument begs the questions by assuming that the unborn is not fully human.

Another popular argument is the Argument from Imposing Morality.

This argument says: It’s wrong for anyone to “force” his view of morality on someone else. Pro-lifers, by attempting to stop women from having abortions, are trying to force their morality on others.

But this argument cannot be right. Because it’s not always wrong for the community to institute laws that require people to behave in certain moral ways. E.g., it’s not wrong to institute a law against child molestation. If the unborn entity is fully human, forbidding abortions would be perfectly just. Any law prohibiting abortion would unjustly impose one’s morality on others only if the act of abortion is good, morally benign, or does not unjustly limit the free agency of another. The real issue is: what counts as a “person,” a full-fledged member of the human community.

[1] All quotes from Francis Beckwith, Defending Life: A Moral and Legal Case Against Abortion Choice

[2] Prima facie is a Latin expression meaning “on its first appearance”, or “by first instance”. It is used in modern legal English to signify that on first examination, a matter appears to be self-evident from the facts. In common law jurisdictions, prima facie denotes evidence that (unless rebutted) would be sufficient to prove a particular proposition or fact.

[4] See Peter Singer, who admits that “pro-life groups are right about one thing: the location of the baby inside or outside the womb cannot make such a crucial moral difference… The solution, however, is not to accept the pro-life view that the fetus is a human being with the same moral status as yours or mine. The solution is the very opposite: to abandon the idea that all human life is of equal worth.” (In Beckwith, 101)
Posted by John Piippo at 5:10 PM