Religion Is Not Essentially Evil 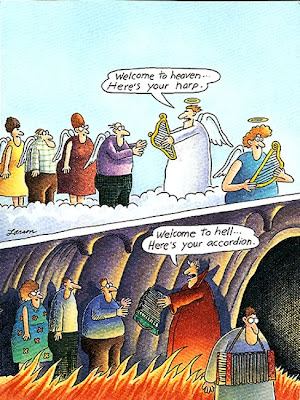 (Thank you Gary Larson - one of the most creative cartoonists ever...)

Dinesh D'Souza is such a solid thinker and excellent writer. When he takes on the New Atheists he makes them look like simpletons (which, philosophically, Dawkins and Hitchens are, but not of course Dennett). Yet Dennett appears the simpleton when he makes a statement like "the belief in a reward in heaven can sometimes motivate acts of monstrous evil." (In D'Souza, Life After Death, 196)

Maybe, but if so only for a very few. If there are a few who do monstrous acts of evil for the sake of gaining a reward in heaven, this does not logically impliy that all of religion is intrinsically evil. D'Souza pointed this out in What's So Great About Christianity, and makes the point again in Life After Death. D'Souza scores points against this facile atheistic claim in the following ways.

Finally, D'Souza goes on to show  not only that religion is not toxic and bad for society, it is good for society. He supports this with points like these.

For anyone captivated by the current atheistic pop-idea that religion is essentially evil and non-beneficial to society, D'Souza's analysis reveals that idea's simple-mindedness. As New Atheist Christopher Hitchens says on the back of the book jacket: "Never one to be daunted by attempting the impossible, Dinesh D'Souza here shows again the argumentative skills that make him such a formidable opponent."
Posted by John Piippo at 10:16 PM