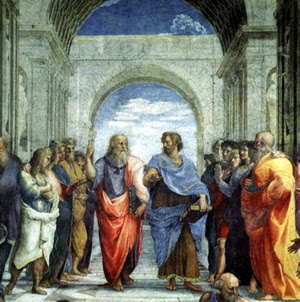 (Plato & Aristotle, by Raphael. Note that Plato is pointing up, Aristotle is motioning down.)

In A New Kind of Christianity Brian McLaren likens the Western Church's view of the biblical story line to Greek thinking of "an 'ontological fall' from Platonic being and transcendent state down into Aristotelian becoming and debased story." (50) This is because Western Church scholars, since the 4th and 5th centuries, read the Judeo-Christian story backwards rather than frontwards.

I don't think so. Why do I have this feeling that a lot of Greek philosophy scholars would start laughing at McLaren's analysis? Probably because I studied with people like Reginald Allen at Northwestern, and took his course on Aristotle's Metaphysics. The move from Plato to Aristotle is not some kind of "Fall." Aristotle did not "fall" from the lofty idealism of Plato. Plato and Aristotle become twin forces that influence Christian theologizing. McLaren offers no scholarly philosophical footnotes to support his odd thesis. I doubt that he can. I find the idea that the Christian idea of the "Fall" is indebted to some kind of a "fall" from Plato to Aristotle just bad philosophy as well as bad history.