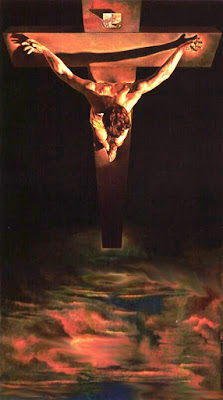 I really liked Brian McLaren's The Secret Message of Jesus, so much so that we use it as required reading in our ministry school. So it is with some anticipation that I begin reading Brian's Jesus-chapters in A New Kind of Christianity. Here we go!

Unfortunately, McLaren does not really answer either of these questions in this chapter. He mostly tells us who Jesus is not. I don't think you can blame this on deconstruction. So let's quickly move on to the next chapter.

McLaren wants us to see Jesus outside "the flat, six-line Greco-Roman narrative," but in "the three-dimensional Jewish narrative." (135) I can't help but wonder if McLaren does not have a false dichotomy here. Especially because he so, in my mind, distorts the Plato-Aristotle thing to fit his theory.

His opponent in this chapter is the Christian who reduces Jesus to just "saving souls from hell." This is too narrow and, for me, functions like a straw man. I agree that this straw man must go down. In my own ongoing investigations of what it means to be "sozo-ed" I have found a great, rich, breadth and depth in Jesus as the Sozo-er that cannot be narrowed into a fire escape from hell. Of course it's not a straw man for a fundamentalist.

McLaren writes that Jesus "came to launch a new Genesis, to led a new Exodus, and announce, embody, and inaugurate a new kingdom as the Prince of Peace (Isa. 9:6)." In the past few years I have been deeply impressed with N.T. Wright's understanding of the Jesus-story as echoing the Exodus story. At many points it seems like Jesus is deliberately making these connections, which would resonate with his Jewish listeners. In this chapter McLaren finds Genesis and Exodus echoes, seemingly, everywhere in, e.g., the Gospel of John. At times I find msyelf wondering if he's not so desirous of finding these echoes to make his hermeneutical points that he hears them everywhere. I'm just not in a place to trust his ears. My mistrust began early in this book. The root of this is that I remaining unconvinced of his construction of the "six-line Greco-Roman precritical lens" through which, he thinks, a lot of Christendom has viewed Jesus. I don't doubt that we all have precritical lenses. I just am not buying into the way he characterizes things and then pigeonholes everyone into when they disagree with him. That's way too easy for me.

I do agree that we should "read" Jesus through the lens of "Jesus' Bible" (as my friend Hal Ronning puts it) rather than through Plato and Aristotle and other Greco-Romans. In this regard I am with him. As should you be, if you are interested in knowing the Real Jesus.
Posted by John Piippo at 12:20 AM