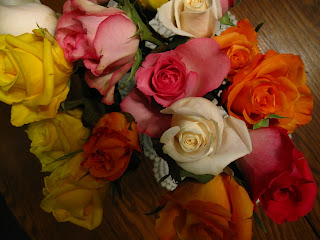 (I bought these roses for Linda on Valentine's Day.)

I was meeting with someone this week who cohabits with someone of the opposite sex. They live in the same apartment, have sex together, and act like they are married. But they are not married, by their own admission. This person asked me, "What is marriage, anyway?" By the look on their face I could tell they really wanted to know. Here are some things I told them, plus a few other points I'd like to make.
The National Institute of Child Health and Development reports:

"Cohabitation, once rare, is now the norm: The researchers found that more than half (54 percent) of all first marriages between 1990 and 1994 began with unmarried cohabitation. They estimate that a majority of young men and women of marriageable age today will spend some time in a cohabiting relationship. ... Cohabiting relationships are less stable than marriages and that instabililty is increasing, the study found."

I am not surprised by this. I've met a lot of people who have been married for decades. I rarely meet a co-habiting couple that stays together that long. But from the Jesus POV, for all of us who love Jesus and follow after him on his Kingdom mission, statistics do not ultimately matter. For us, even if 99.999% of the world cohabited, our question remains: "God, what have you designed for us?" The answer remains, as it always has: Covenant-welded marriage. I think there is something noble and heroic about life-commiting before God and family and friends, and then staying together and growing together through better times and worse times. Increasingly, I view such couples as radical, revolutionary, as heroes.
Posted by John Piippo at 7:19 PM