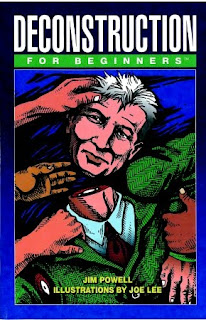 Brian McLaren only uses the word "deconstruction" a few times in A New Kind of Christianity. When he does use it, I think he misuses it. He may think he's deconstructing the biblical narrative, but I doubt it.

McLaren writes: "When I was in graduate school, the practice of "deconstruction" was in its ascendency, providing me yet another advantage as I have pursued this quest. Deconstruction is not destruction, as many erroneously assume, but rather careful and loving attention to the construction of ideas, beliefs, systems, values, and cultures." (55)

Not quite. Almost: not at all. It is true that deconstruction does not equal "destruction." But the rest of McLaren's explanation of "deconstruction" is so general that it could apply to almost anything. For the actual meaning of "deconstruction" go here or here. In the latter essay James Faulconer defines Derrida's idea of deconstruction as: "showing that something has been left out or overlooked, that omission is structural to any text -- and that we can find those omissions in the structure of the text -- without necessarily being able to specify what has been omitted."

Check out these defintions of "deconstruction" gathered from many sources and you won't recognize McLaren's anywhere. So what's my point, and why raise it? Because McLaren thinks he is deconstructing the Bible to get at its real meaning. He writes: "When you approach the Bible literarily, aided by these kind of advantages [such as deconstruction], the Genesis narrative sets the stage for what follows. As we've seen, it's the story of a good creation mrred by expanding human evil, countered by divine faithfulness, leading to profound reconciliation and healing." (56) With this quote in mind, consider what Rebecca Goldstein has to say:  "In deconstruction, the critic claims there is no meaning to be found in the actual text, but only in the various, often mutually irreconcilable, 'virtual texts' constructed by readers in their search for meaning." (Cited here)

On deconstruction, is there a meaning in the text? (See here, p. 373) Wrong question. Vanhoozer says that deconstruction denies that there is a center to the text. (Ib.) But deconstruction, as a way of undoing interpretations, can show us what a text is not. Presumably that is not something McLaren wishes to do as he gives us an interpretation of what he thinks the biblical story is.
Posted by John Piippo at 11:13 PM