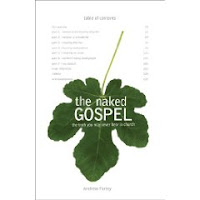 Andrew Farley, in his book The Naked Gospel, makes the outrageous-sounding claim that the real Jesus-life is not a life of trying to obey Old Testament laws, to include even the Ten Commandments. Now that is the kind of claim that makes me fear for Farley's life. Surely even now, as I write, Farley is hiding in some cave deep in a forest in northern Alaska where no Christian Evangelical can be found. But as a Jesus-follower myself I think his claim is, essentially, biblical and correct. It's rooted in the biblical distinction between the Old Covenant and the New Covenant. (Farley - please prepare a spot for me in your cave...)

It's not that the law is sinful. As Paul says, in Romans 7:12, "the law is holy, and the commandment is holy, righteous and good." The "law" is not flawed. "But its perfect standard when combined with human effort results in failure. In short, the law is perfect, but it makes no one perfect." Therefore, whatever else Real Christianity is, it is not a life of constantly striving to follow the laws of God that God laid down in the Old Testament. Yet this is precisely how many Christians view it, teach it, preach it, and live it. When that happens, it's not good news, and it fundamentally misunderstands the Real Gospel. Note this: real Christianity is not about (no longer about) striving to measure up to the perfect laws of God. If you haven't got this point, then Farley's book presents it well.

Paul writes to Timothy, "We know that the law is good if one uses it properly. We also know that law is not made for the righteous..." (1 Timothy 1:8-9a) Farley says: "The law still exists and has a purpose today. But it's not designed for Christians as a tool or guide for daily living. Its sole purpose is to convict the ungodly of their spiritually dead state." (61)

The Holy Spirit is not given to Jesus-followers so that we might comply with the law. Jesus has already met the requirements of the law - See Romans 8:3-4. Paul tells us that, as we are now "in Christ," we are "dead to the law." "Through the law I died to the law so that I might live for God." (Galatians 2:19) In Romans 7:4, 6, Paul writes "you also died to the law through the body of Christ."

What's going on so far in Farley's book? Here are a few things I am thinking.