Brian McLaren On the God of the Old Testament 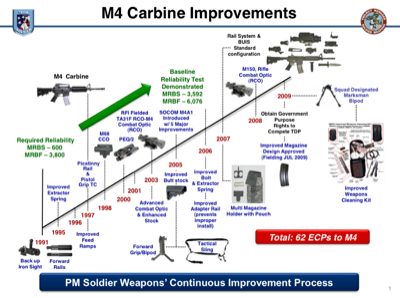 (Upward-evolutionary progress of the M4 Carbine)

One of Brian McLaren's "ten questions that are transforming the faith is "the God question: Is God violent?" (A New Kind of Christianity, 19) He deals with the question in chs. 10 & 11. Brian's solution is this: Read the Bible as an ongoing conversation about the character of God.

Why does God appear so violent in some passages of the Bible? McLaren writes: "We suggest this hypothesis: if the human beings who produced those passages were violent in their own development, they would naturally see God through the lens of their experience." (106)

For Brian it's not that God's character changes, "as if God used to be rather adolescent, but has taken a turn for the better and is growing up nicely over the last few centuries. I am saying that human beings can't do better than their very best at any given moment to communicate about God as they understand God, and that Scripture faithfully reveals the evolution of our ancestors' best attempts to communicate their successive best understandings of God. As human capacity grows to conceive of a higher and wiser view of God, each new vision is faithfully preserved in Scripture like fossils in layers of sediment." (103)

What McLaren says next reminds me of good old-fashioned "progressive revelation." He writes: "Consider the Bible a collection of math textbooks. There's a first-grade text, a second-grade text, and so on, all the way up to high school texts..." (103)

McLaren seems to say that there is a biblical progression/evolution of the portrayal of God that is function of a spiritual and moral human evolution. Consider his "time machine" analogy. Imagine taking a time machine from today to the year 3013. "When we arrive, we find that people in the future are deeply spiritual. They have continued to grow in the knowledge and ways of the Lord over these many centuries. And they have grown socially as well as spiritually." For example, "they no longer fight wars. All conflicts are resolved through peaceful negotiation." (106)

If I read McLaren correctly his answer to the "Is God violent?" question is as follows.

I wonder about what McLaren is doing here. In these ways: