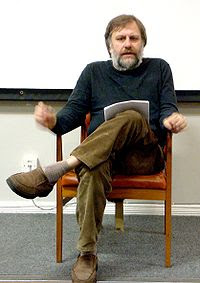 Here's a little  bit of rambling writing with some autobiography added as I am picking up Tony Myers's book Slavoj Zizek. Zizek is a Slovenian philosopher who has been referred to "the wild man of theory." This in itself might be enough to make me want to find out about him. But I have heard of him, not only in philosophical but also theological contexts. Zizek the atheist is interested in Christianity. I want to know why theology matters to him. I'm interested in brilliant crazy people (like Nietzsche), wondering if their craziness is precisely the does of reality we need to see. So, I'm looking into a book on Zizek before I actually read him as he dialogues with John Milbank in The Monstrosity of Christ: Paradox or Dialectic?

A little bit about Zizek. "Zizek's subject matter is the hole in the discourse of philosophy." (Myers, 3) The rhetorical figure used to describe this kind of thinking is apophasis. "Apophasis is the device of mentioning a subject by saying you will not mention it - for example, 'under no circumstances will I be drawn to discuss the minister's infidelity'." (Ib.) Myers says that "apophasis articulates a kind of hole in a discourse." (Ib.) Zizek apophatically talks about what should not be talked about in philosophy. It appears that this will be important methodologically.

In my doctoral studies at Northwestern I took an independent study on Meister Eckhart with Richard Kieckhefer. There are rich connections here with me, as I have long been interested in Christian spirituality and Eckhart is the "wild man" of apophatic spirituality. I had studied and still remain fascinated to a degree by Heidegger, and Heidegger made reference to Eckhart, especially Eckhart's idea of Gelassenheit. Now here is Zizek, who is an atheist with some kind of deep appreciation for Christian theology, who will also make use of Eckhart.

The question Milbank and Zizek deal with is: "How can the theological and the material
unite to fund resistance to capitalist nihilism?" (Creston Davis, in The Monstrosity of Christ) Apparently Zizekian apophasis will play a role. The question under discussion is intriguing. (For a bit of Zizekian atheistic-theological madness go here.)
Posted by John Piippo at 11:40 PM