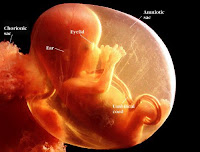 This Tuesday MTV will show an episode of "16 and Pregnant" that was partially filmed at our church's building. It happened this way.

A 16-year old girl named Nikki who lives in Monroe County got pregnant. The producers of "16 & Pregnant" connected with her. Nikki and her family wanted to do a baby shower. One of Nikki's relatives is part of our church family, and asked if they could do the baby shower at Redeemer. I and our leaders said "yes."

Prior to our decision I watched a few episodes of "16 & Pregnant" and was mostly impressed with the realism of the show. It does not glamorize teen pregnancy. And, in every episode, the pregnant teen gives birth to the baby. Yay!

On a Saturday back in the fall the film crew & director arrived. I greeted them, then got out of the way. Since I know some of the family we talked together. There were a lot of people in our church's gym and a really big pile of presents for the coming baby. The family asked me to say a prayer to begin the event. I said "Of course!" I prayed that God's Kingdom would come upon this baby shower, and prayed for Nikki, Josh, and the baby. I knew that my Jesus, the Real Jesus, was in this place. Both Nikki's and Josh's moms thanked us for allowing them to have the shower at Redeemer.

The director and film crew were polite and very professional, business-like. As I talked with the director I had an idea and ran it by her. I said, "Look, I'm 60 years old. How about you guys starting a new TV series featuring me and call it "60 and Not Pregnant?"" I am now trying to remember the look that she gave me.
Posted by John Piippo at 10:21 AM