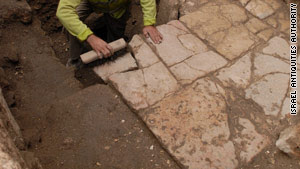 If I had a next life on this earth I would be an archaeologist in Israel who studied philosophy and theology on the side. Here's the latest discovery, from the Jerusalem Post.

"For the first time the main road of Jerusalem, dated 1,500 years ago, has been discovered. An Israel Antiquities Authority archeological excavation in the heart of Jerusalem’s old city confirms a description of the road on the Madaba Map – an ancient mosaic map from the sixth century CE, measuring eight by 16 meters, and located in a church in Madaba, Jordan.


The map, from the Byzantine period, is the oldest surviving original cartographic depiction of the Land of Israel. What is notable on the map is the illustration of the entrance to Jerusalem from the west via a very large gate that led to a single, central thoroughfare on that side of the city."