In Defense of Exclusivism 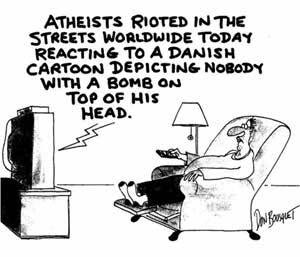 William Dembski writes: "Any act of speaking is at once exclusionary and irrevocable" to affirm one thing is to exclude or rule out others... Because a particular spoken word always excludes other spoken words, speech constitutes self-limitation. To say "I do" at your wedding means to say "I don't" to all others." (The End of Christianity, 96-97)

Demsbki's book is his answer to the problem of evil. He holds to old-earth theory (billions of years old) while attributing all evil, to include natural evil that existed prior to humanity, to human sin. Dembski's theodicy shows that "the effects of the Fall can be retroactive as well as proactive." (10)

But I'm going to use the statements quoted above for a different purpose. I think they are true, and have implications for a number of things.

Say anything and you've excluded a lot of people. "Exclusion" cannot be avoided. Indeed, the person who says "An inclusive language is possible" thereby excludes all who think such a thing is not possible. Say "Jesus cannot be the only way to God" and  a few billion people get excluded. Say "There is no God," or "We cannot know if there is a God," or be Bertrand Russell-like and say "God, if there is a God, has not given us enough evidence," and those of us who feel God has given enough evidence get excluded. Not very nice of you to do that, Mr. Russell.

Even statements like "This piece of chalk is white," uttered as I am holding a piece of white chalk, excludes any person who, for whatever reason, doubts it.

It seems that some statements are less exclusionary than others. Like "It is now snowing," spoken as I look out the window. Actually, that's exclusionary, since it is not now snowing in many places. So: "It is now snowing, in my front yard, on Feb. 9, 2010, 3:37 PM." It seems that most people would not be excluded by such a statement. But, if that is true, the statement is so insignificant that maybe the more trivial a statement is the less exclusionary it will be, because who would want to debate the truth of such a thing? But utter "The chalk is white" and try to defend its truth in the presence of a group of philosophy of science scholars and you'll enter into a world of epistemic problems and fundamental disagreements.

To conclude: no theory, no act of speaking, can in principle be all-inclusive. If this is so we surely can give up trying to please or include everyone as regards our deeply-held beliefs. And we need not feel threatened by the argument that accuses us of being "exclusivists," since exclusivism is inevitable anyway. As Alvin Plantinga has written, in his essay on "A Defense of Religious Exclusivism": Religious exclusivism is not necessarily a moral or intellectual failure and, given the human condition, some exclusivism is inevitable in our lives. (pp. 187 ff.)

Perhaps the "problem"of religious exclusivism is that, unlike the piece of white chalk, the stakes are so high. That is, what one is being "excluded" from is, precisely, eternal existence worshiping the God who made us. Here are some resources I find helpful.