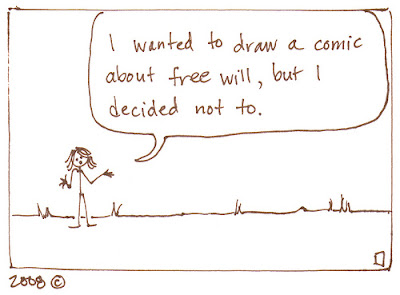 Several months ago I read Naturalism, by Stewart Goetz and Charles Taliaferro. What an excellent read! I brought it to La Jolla with me and began re-reading it on the plane. It's a critical assessment of philosophical naturalism and its variations, such as "strict naturalism." What's that? G&T quote strict naturalist Paul Churchland:

"You came to this book assuming that the basic units of human cognition are states such as thoughts, beliefs, perceptions, desires, and preferences. That assumption is natural enough: it is built into the vocabulary of every natural language. ... These assumptions are central elements in our standard conception of human cognitive activity, a conception often called 'folk psychology' to acknowledge it as the common property of folks generally. Their universality notwithstanding, these bedrock assumptions are probably mistaken."

Churchland's strict naturalism argues that there are no such things as "mind," "soul," and "free will." G&T take this idea (that "nature" is all that there is) and show that it is fundamentally incoherent.  But this is self-defeating, "because it''s proponents believe that [naturalism] is true and seek to convince us of its truth, wheras if the view is true, then there ultimately is no such thing as belieiving it is true because there ultimately are no psychologicalevents of that kind, period." (26)

In naturalism G&T challenge "the almost unquestioned primacy of naturalism." (9) It's such a good presentation that I'm now re-reading and re-absorbing their arguments against naturalism and for theism.
Posted by John Piippo at 12:09 PM