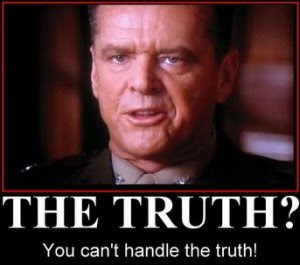 "There is no way to know what is true -- in a final way." This is one of the "truths" Christian Smith has discovered in his analysis of today's American teens and young adults. I am certain he is correct about this. I have seen this thing manifest itself many times in my college philosophy classes.

I have not read Smith's book. I tried to access the relevant chapter from google books, but was blocked. So, let me extrapolate from that opening sentence and make some comments, understanding that I might not have it right.

Tensions rise in the classroom when I say things like "It is true that the lights in this room are now on." Worldviews are being shattered when I begin to talk about properly basic, "bedrock" beliefs, such as "1+1=2," a statement which everyone believes but not one of my students can prove. If someone says, "Well, we can't be sure that '1+1=2'... it might not be true," or "I am not sure that '1+1=2,'" I then tell them, if you think that, say, "1+1 = 3," then I want to exchange money with you all day.
Posted by John Piippo at 8:51 PM