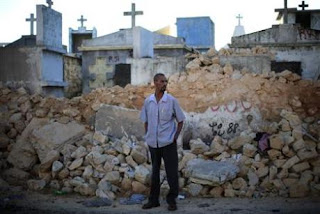 An op-ed in today's nytimes.com is entitled "Haiti's Angry God." Poojah Bhatia writes: "If God exists, he’s really got it in for Haiti. Haitians think so, too. Zed, a housekeeper in my apartment complex, said God was angry at sinners around the world, but especially in Haiti. Zed said the quake had fortified her faith, and that she understood it as divine retribution...  Why, then, turn to a God who seems to be absent at best and vindictive at worst? Haitians don’t have other options. The country has a long legacy of repression and exploitation; international peacekeepers come and go; the earth no longer provides food; jobs almost don’t exist. Perhaps a God who hides is better than nothing."

Here are some thoughts I have about this.

1. The situation is tragic. I just looked at many photos of the aftermath - dead bodies lying everywhere; a father crying as his little daughter's dead body lies before him; countless homes and dwelling places demolished. What the earthquake caused was horrendous. The aftermath is going to be staggering in terms of things like - lack of clean water, lack of shelter, lack of health care, disposal of the bodies, pollution, and what looks like the need to totally level the entire afflicted area and begin from scratch.

2. You and I must help, somehow. Let those who choose to ignore Haiti not complain about the absence of God. Let those who believe in God become God's heart and hands. Personally, I am asking God how I can assist, at this time, in a way that is most relevant and helpful.

3. That, in our current state of techno-advancement as a global community, a "Haiti" even exists is a sign of global greed. You may not personally be greedy. And, thank God for real Jesus-followers who spend their lives rescuing others out of a hopelessness that is many times not of their own doing, but of their historical and geographical situatedness. But mankind, largely, is greedy. People like Richard Stearns of World Vision reports that  much of Christendom, as well, is greedy.

Speaking to people who claim to be Jesus-followers, Stearns has called this situation "the hole in our gospel."  Not one of us could have stopped this earthquake from happening. But that hundreds of thousands of people live below the poverty line in a country whose infrastructure is an indequate disaster-waiting-to-happen, and which physically exists on top of an earthquake zone, is the kind of situation which, it seems to me, lies behind Stearns's appeal when he writes something like this: "One of the disturbing things about Church history is that the Church's appalling track record of being on the wrong side of the great social issues of the day. If the Church is indeed a revolutionary  kind of institution, called to foment a social revolution by promoting justice, lifting up the sanctity of human life, fighting for the underdog, and challenging the prevailing value systems in our world, then it seems we should be out front on social justice issues rather than bringing up the rear." (Hole, 190) The earthquake itself was a physical, not a social, event. But pre-earthquake Haitian society claimed the dubious distinction of being the most impoverished country in our hemisphere.

I have no idea if nytimes essayist Poojah Bhatia has ever assisted pre-earthquake Haiti. I suggest that if he has not, then he would do well to be cautious before claiming "God really has it in for Haiti," since Haiti has long-been one of the most suffering-est spots on our planet.

4. Action is what is now needed, not theorizing. Now's not the time to grab a Starbuck's, sit before a glowing fireplace, and philosophize and theologize about the existence of God and the problem of evil if one does nothing in the effort to eradicate systemic moral evil and inequity. Yet Bhatia uses the occasion to at best criticize God for "hiding" and at worst implies that God does not exist. Bhatia says that, as he was wandering the Haitian streets, "there was singing all over town: songs with lyrics like “O Lord, keep me close to you” and “Forgive me, Jesus.” Preachers stood atop boxes and gave impromptu sermons, reassuring their listeners in the dark: “It seems like the Good Lord is hiding, but he’s here. He’s always here.”" I suggest that Bhatia's sceptical and a-theological inferences will not help our struggling Haitian brothers and sisters who are, many of them, deeply religious.

In my seminary teaching I have had, as students, Haitian pastors and Haitian leaders. I can assure you that the ones I know, and the people who are loved and served by them, have not come to believe in a God who is primarily deus absconditus. These friends of mine do not believe in God and Jesus because "they have no other option." They do not believe nor do they teach their people that God hates them and their country.

Seek God how best to assist Haiti.
Pray for Haiti.
If you are a Jesus-follower, remember the gospel of Jesus the Christ, who comes to fill not only the aching hole in our own hearts but those of our neighbors as well.
Posted by John Piippo at 6:35 PM