I Am In Christ Jesus 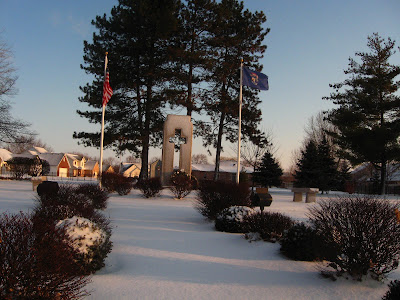 (Monroe, a half mile east of our house.)

Andrew Murray, in chapter 5 of Abide in Christ, writes: "The whole Christian life depends on the clear consciousness of our position in Christ. Most essential to the abiding in Christ is the daily renewal of our faith's assurance, "I am in Christ Jesus.""

"Brothers, think of what you were when you were called. Not many of you were wise by human standards; not many were influential; not many were of noble birth. But God chose the foolish things of the world to shame the wise; God chose the weak things of the world to shame the strong. He chose the lowly things of this world and the despised things—and the things that are not—to nullify the things that are, so that no one may boast before him. It is because of him that you are in Christ Jesus, who has become for us wisdom from God—that is, our righteousness, holiness and redemption. Therefore, as it is written: "Let him who boasts boast in the Lord.""

Here we see the core Jesus-Kingdom-idea about true greatness. "Greatness" in God's Kingdom is not what it is in any earthly kingdom. It's not about intellect or birthright or physical strength or economic power.

Recently I had the privilege of meeting with a simple (but not simplistic) man who has little money, no earthly fame, is not especially physically attractive, and speaks the English language in a very ungrammatical and syntactically incorrect way. As we were talking I sensed Jesus in him. This man's heart's location is "in Christ." He's older than I, and fairly recently has been rescued out of a life of drugs and violence. I could see the joy and amazement in his eyes as he told me his story. There was a simple, deep wisdom in him that is not about him but all about Jesus in him, and he in Jesus. This man knows his position in Christ. I may ask him to share his story to our church family.

As I left him I had a feeling that I've often had; viz., the feeling that, somehow, I've just had a meeting with Jesus. The truth is that, in a very real sense, I had met with Jesus. And Jesus met with us, because we're both abiding in Him.

If there's anything to brag about in this life, it's just this: Thanks to God, I am in Christ Jesus.

To abide, means to walk in the Spirit.


Living on Earth, the planet, guarantees that some conditions will influence me. Gravity, for instance. Before my waking consciousness forms its first ideas for the day, it is taking gravity into account. My interaction towards mattresses, shower heads, stairs, toasters, briefcases, and tire friction all depend on gravity. This force is a fundamental quality in the space where I live.

Would that it were the same with supernatural love. The ground of faith is no less familiar with such a force. The space of abiding no less saturated than to luxuriously permeate my encounter with the world. And my first ideas, too often acknowledge themselves as traitors to the dwelling of my soul. My interaction toward relationships, obligations, social exchanges, job requirements, financial situations, personal hopes, etc. and etc. stands much to gain from the secret place of abiding.

That walking through a course of events would at first step be upon the way of life.
Posted by John Piippo at 6:19 PM