Fearing the Improbable: The Coming Asteroid That Will Miss Us 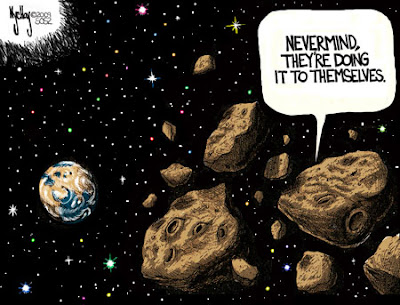 I've been in an apocalyptic mood since watching "Avatar." I'm sitting here with nothing much to do, when I read the nytimes science section and find something to worry about. Here's an article about Russia's top space researchers, who are planning "a mission to deflect 99942 Apophis, an asteroid that will fly close to Earth two decades from now, said Anatoly N. Perminov, the head of Russia’s space agency, during an interview on Russian radio on Wednesday." The year will be 2029. The asteroid is 1,000 feet long. If it hits us it will kill hundreds of thousands of people plus do who-knows-how-much environmental damage.

But NASA thinks this will be a non-event. In 2029 Apophis will come within 18,300 miles of the earth. This means: it will miss us. This is not like "horseshoes," where the asteroid will score some points on you just by coming close. On its second earth-approach, in 2036, the odds of it hitting earth are 1 on 250,000. In 2036, on approach #3, the odds of it hitting earth are 1 in 333,000. What does this mean? It means: three strikes and you're out! This asteroid will not hit us. Which means several millions of dollars should not be spent to deflect it, since it's not going to hit us anyway. Besides, some object "to using Apophis to test new deflection methods, saying there was more risk if something went wrong. It takes a very small change in the Apophis orbit to cause it to impact the Earth instead of missing it.” In 2029, when I am 80, I do not want to hear about Russian scientists trying to deflect an asteroid that's already going to miss us by a whole lot. Then, I will have some fears.

Consider the following run-on sentence, which is true. If you eat a snack before you go to bed tonight you could get food poisoning, and if you walk outside you could trip and break your neck, and if you drive onto the street you could get hit by a truck, and Osama bin Laden could be hiding in the bushes in your backyard, so here you are feeling sick to your stomach with multiple injuries and you see bin Laden peeping in your bathroom window. If that sounds wild it's because it is wild. Really, he "could" be there, since there's no logical impossibility against his being there. But it's wild; i.e., wildly improbable. And if it is true the good news is your decaptitated head will be on the cover of USA Today.

Waste not time, energy, nor money on the improbable. Improbable things are not to be feared. It's true that we don't know a lot of what's coming at us or to us from around the bend. But we can know, inductively, that we need not worry about a lot of things simply because they will not likely happen. If our fears of the improbable were exorcised from our minds we would, corporately, face the future with more confidence. And, for Jesus' followers, good things are to come.

If you feel disoriented because you're not fearing something, expend your fear on God. Listen to the end of Eccelsiastes, as given in The Message:

"But regarding anything beyond this, dear friend, go easy. There's no end to the publishing of books, and constant study wears you out so you're no good for anything else. The last and final word is this:


And that's it. Eventually God will bring everything that we do out into the open and judge it according to its hidden intent, whether it's good or evil."

Or, as Jesus counsels us, "Seek first his kingdom and his righteousness, and all these things will be given to you as well. Therefore do not worry about tomorrow, for tomorrow will worry about itself. Each day has enough trouble of its own." (Jesus, in Matthew 6:32-33)
Posted by John Piippo at 10:15 PM