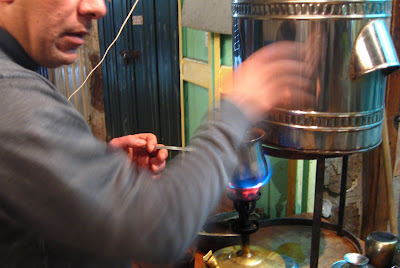 (I paid $2 for this cup of Palestinian coffee in Jerusalem.)

At 60 years old I am still learning. Part of learning is unlearning. For example, I have always interpreted Romans chapter 7 as a description of a Christian's inner struggle between knowing what is right to do and doing, instead, what is wrong to do. Now Ben Witherington is telling me I have been wrong. Witherington claims:
But isn't Paul, in using 'I' language, referring to himself? No, says Witherington. He asks, in his chapter "Squinting At the Pauline "I" Chart," "who is the "I" then who is speaking here?" He concludes, "In my view the I is Adam in vv. 7-13, and all those who are currently "in Adam" in vv. 14-25." How does Witherington arrive at this? To get the whole picture you need to read this entire chapter. But briefly, one key is to understand that Paul is using a rhetorical technique called "prosopopoia," which "involves the assumption of a role." Sometimes the role-playing speech would be inserted "without mentioning the speaker at all." (Ib., 22) Witherington adds, "Unfortunately for us, we did not get to hear Paul's discourse delivered in its original setting, as was Paul's intent. it is not surprising then, having only Paul's written wors left to us, that many have not picked up on the signals that impersonation is happening in Romans 7:7-13 and also for that matter in 7:14-25." (Ib., 22)

What can I say about this? Some thoughts: