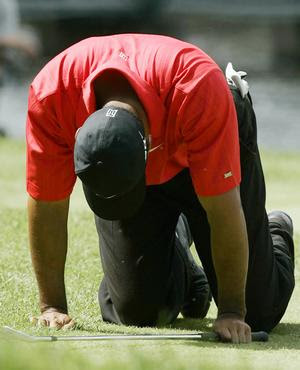 Back in the 1970s I heard philosophical theologian John Cobb speak at the U of Chicago on the idea of "grace" in Pure Land Buddhism. "Grace," a central Christian theistic concept, finds, in general, little place in Buddhism for a variety of metaphysical reasons. But Cobb argued that "grace" can be found in Pure Land Buddhist teachings.

C.S. Lewis was once asked, what is the difference between Christianity and the other religions? Lewis responded, "That's easy. It's 'grace'."

So it was a few days ago, when FOX news analyst Brit Hume suggested that adultery-plagued Tiger Woods would do better if he left his Buddhism and converted to Christianity.

We read: "Hume, speaking on Fox News Sunday, said he wants the beleaguered golfer to convert to Christianity because he believes Buddhism leaves no place for the "redemption" Tiger needs. "Whether he can recover as a person I think is a very open question, and it's a tragic situation with him," Hume said. "The extent to which he can recover seems to me depends on his faith," Hume continued. "He is said to be a Buddhist. I don't think that faith offers the kind of forgiveness and redemption that is offered by the Christian faith." Hume said his message to Tiger would be, "Tiger, turn to the Christian faith and you can make a total recovery and be a great example to the world.'""

Some Buddhists have responded negatively to Hume's advice.

Here are my thoughts.

Back in the 1980s, I was one day sitting in my office adjacent to the campus of Michigan State University where I was a campus pastor. A young woman with a little boy knocked on my door. She came inside, the boy waited outside.

"I have a problem that I don't know what to do about," she said.

"See my little boy out there? My husband loves him deeply. But this boy is not my husband's son, and my husband does not know it. As the boy is growing older he is looking more and more like his real father. Some day soon I am certain my husband will wonder why his son does not look like him. I am afraid of what will then happen. What can I do?!"

I knew the answer, the only answer that made sense to me and still does make sense to me. Here is what I shared with her.

"If you embrace Jesus and allow Jesus to come to you and be the Captain of your life, you will understand what the Cross is all about and not only intellectually know about forgiveness, but experience forgiveness. God wants to forgive you, redeem you, and set you free."

I answered: "If your husband also comes to know Jesus, understand his own deep personal need for forgiveness and inner cleansing, and then experiences the redemptive Cross-work of Jesus, he will also be able to forgive you. I have seen this happen many times."

Apart from this I know of no other answer that is so effective and powerful. I have seen people who hate and despise one another come together in love and forgiveness at the foot of the cross.

So if Tiger Woods and his wife Elin understood and embraced this, I'm thinking "just watch what miught happen now." It could be good, very good. Needed: humility and the breaking of pride. And Tiger would know that, in his sin that has destroyed so much, he's not anywhere as unique as the media makes him out to be. He's a slob like the rest of us, in need of forgivenness, redemption, sozo-ing.
Posted by John Piippo at 1:55 PM