Whatever You "Personally Think of God" Just Doesn't Matter 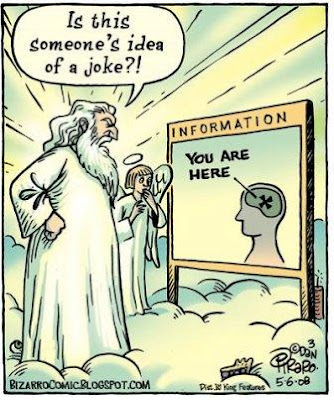 I began reading Julian Barnes's Nothing to Be Frightened Of yesterday. Barnes is an agnostic who stopped believing in God for the most trivial, non-philosophical reasons as a child. Now, he still does not believe God exists, but claims agnosticism since none of us know very much at all.

Barnes is a brilliant writer, engaging and often very funny. I find myself laughing out loud at points in the book. It's an extended meditation of death, from a non-believer's perspective. Inevitably, in talking about one's own death, people - even Barnes - talks about God.

One of the things Barnes derides and despises and rejects is the idea of one's "personal idea of God." He writes: "A common response in surveys of religious attitudes is to say something like, "I don't go to church, but I have my own personal idea of God." This kind of statement makes me in turn act like a philosopher. Soppy, I cry. You may have your own personal idea of God, but does God have His own personal idea of you? Because that's what matters. Whether He's an old man with a white beard sitting in the sky, or a life force, or a disinterested prime mover, or a clockmaker, or a woman, or a nebulous moral force, or Nothing At All, what counts is what He, She, it, or Nothing thinks ofyou rather than what you think of them. The notion of redefining the deity into something that works for you is grotesque. It also doesn't matter whether God is just or benevolent or even observant - of which there seems startlingly little proof - only that He exists." (46) (For me, it's not the person who has their "personal idea of God" that does not matter, but the epistemic content of their "personal idea of God" that is of no consequence or interest.)

I'm not with Barnes on the unimportance of and evidential aspects of the benevolent nature of God. But I am with the rest of what he here says. The "personal avatar" idea of God, when someone presents this to me in a sentence that begins "For me God is...", means nothing to me except that it adds to the sociological religio-cultural survey-databank in my brain. If God exists (which I think He does), then God exists for us all, and His nature/essence is the same for us all. At this point personally invented "gods," like designer clothing, only illustrate a kind of mini-temporal trend that has no relevance as regards the real question. In this sense, as Barnes says, whatever one "personally" thinks of God just doesn't matter. I agree.
Posted by John Piippo at 12:44 PM