Denzel Washington & The Book of Eli 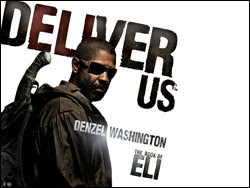 Linda and I saw "The Book of Eli" Friday night. I have some thoughts about "Eli," and then about Denzel.