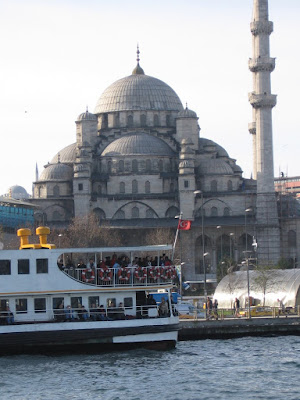 A Malaysian high court has ruled that the word "Allah" is not exclusive to Muslims. Uh-oh. The time.com report says...

"The anger seemed to turn into violence late Thursday night after masked men on motorcycles firebombed three churches in the city, gutting the ground floor of the Metro Tabernacle Church, located in a commercial building in the Desa Melawati suburb of the capital. The attacks, which police said appeared uncoordinated, were condemned by the government, opposition MPs and Muslim clerics alike. On Friday, Muslims demonstrated in scores of mosques across the country, but the protest was peaceful. In the mosque in Kampung Baru, a Malay enclave in the city, Muslims held placards that read "Leave Islam alone! Treat us as you would treat yourself! Don't test our patience!" amid cries of "Allah is great!""

In Malaysia "political Islam" is a "growing force." Uh-oh. Malaysia "operates under two sets of laws, one for Muslims, the other for everyone else."  "The few Muslims who have urged respect for judicial independence have been shouted down as traitors. "I can't understand how any Muslim can support this judgment," said legislator Zulkifli Noordin in a statement."

Roman Catholic "lawyers for the church argued that the word Allah predated Islam and was commonly used by Copts, Jews and Christians to denote God in many parts of the world. They argued that Allah is an Arabic word for God and has been used for decades by the church in Malaysia and Indonesia. And they said that the Herald uses the word Allah for God to meet the needs of its Malay-speaking worshippers on the island of Borneo."

If Catholics are allowed to use the word "Allah" Muslims would be "confused."
"The confusion would worsen, they said, because Christians recognize a "trinity of gods" while Islam is "totally monotheistic."" That idea reveals Mohammed's, and Islam's (in general) basic confusion about Christian Trinitarian theism, which does not recognize a "trinity of gods." That, precisely, is something I have never believed as a Christian. It's simply false, and a misrepresentation. About this let's dialogue, not firebomb.

Time.com says: "Non-Muslim Malaysians worry that the vehement opposition to the Allah ruling reflects a growing Islamization in a multireligious society. Last October a Shari'a court sentenced a Muslim woman who drank beer to be caned in public; in another incident, in November, Muslims enraged over the construction of a Hindu temple near their homes demonstrated their anger with a severed cow's head. They kicked and stomped on the head, as Hindus — to whom cows are sacred — watched helplessly."

This kind of stuff, which happens a lot, makes it exceedingly difficult for peaceful, "interfaith" Muslims (like Imam Qazwini and Eide Alawan of the Islamic Center of America in Dearborn) to promote Islam as intrinsically peaceful.

Combine such religious over-reactions with a text like Christopher Caldwell's Reflections on the Revolution In Europe: Immigration, Islam, and the West and one easily thinks... uh-oh.
Posted by John Piippo at 12:01 AM