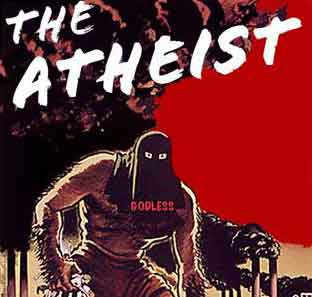 Former Kantian moralist Joel Marks (University of New Haven) writes: “I think the time has come, therefore, to reveal it to the world, and in particular to you, Dear Reader, who have patiently considered my defenses of a particular sort of moral theory for the last ten years. In a word, this philosopher has long been laboring under an unexamined assumption, namely, that there is such a thing as right and wrong. I now believe there isn’t.”

2. Hard atheism is analogous to what in philosophy is known as “hard determinism.”

4. “The whole crop of ‘New Atheists’ are “softies”; viz., “soft atheists” who hold that one could be an atheist and still embrace morality.

5. Therefore Marks must logically embrace amorality (= there’s no such thing as right and wrong).

He calls this “hard atheism.” I embrace his reasoning, even applaud it. Were I an atheist I would not be able to believe there is a right and wrong. Marks writes of his conversion from soft atheism to hard atheism: “So was I, until I experienced my shocking epiphany that the religious fundamentalists are correct: without God, there is no morality. But they are incorrect, I still believe, about there being a God. Hence, I believe, there is no morality.” Indeed!

This whole paragraph says it well.

“Why do I now accept hard atheism? I was struck by salient parallels between religion and morality, especially that both avail themselves of imperatives or commands, which are intended to apply universally. In the case of religion, and most obviously theism, these commands emanate from a Commander; “and this all people call God,” as Aquinas might have put it. The problem with theism is of course the shaky grounds for believing in God. But the problem with morality, I now maintain, is that it is in even worse shape than religion in this regard; for if there were a God, His issuing commands would make some kind of sense. But if there is no God, as of course atheists assert, then what sense could be made of there being commands of this sort? In sum, while theists take the obvious existence of moral commands to be a kind of proof of the existence of a Commander, i.e., God, I now take the non-existence of a Commander as a kind of proof that there are no Commands, i.e., morality.”

Marks’ realization sent him “reeling,” since his life, even though an atheist, was rooted in Kant’s understanding of morality. “Morality has been the essence of my existence, both personally and professionally. Now it is no more.”

Since Marks believe there is no Commander God (i.e., a God who is perfectly good in essence and issues commands that are good), the ground for morality are gone. The issues then become twofold, for me:

Marks then writes in answer to the question: How then shall we live?

I can agree with Marks that the only atheism worth holding is hard atheism. In that we are both dissatisfied with the New Atheist softies.
Posted by John Piippo at 9:42 AM