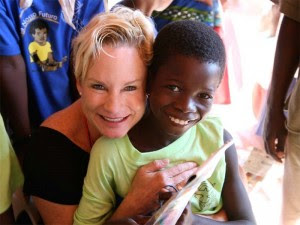 Dr. Candy Brown's research paper is now out and it has gone and is going (as I write) global. Candy traveled with Heidi Baker a year ago studying persons who received prayer (PIP = "Proximal Intercessory Prayer) for their hearing and vision.

"If empirical research continues to indicate that [proximal intercessory prayer] may be therapeutically beneficial then -- whether or not the mechanisms are adequately understood -- there are ethical and nonpartisan public policy reasons to encourage further related research," the lead author of the study, Candy Gunther Brown, said in a news release.

An editorial accompanying the study, released online Wednesday in the Southern Medical Journal, concurred. Dr. John R. Peteet, a psychiatrist at Brigham and Women's Hospital in Boston, notes that the authors of the study aren't asking readers to consider a supernatural explanation for the findings. "...but their report challenges the world view of readers who rule out the supernatural, or relegate it to another time," he wrote."

The India Times article says - "The power of prayer really can help cure the sick, according to a new study."

The UK Daily Mail article says: "Professor Brown said one subject, an elderly Mozambican woman named Maryam, initially reported that she could not see a person's hand with two upraised fingers from a distance of one foot.

A healing practitioner put her hand on Maryam's eyes, hugged her and prayed for less than a minute then held five fingers in front of her. Afterwards she was able to count them and even read the 20/125 line on a vision chart. A follow-up study by the researchers in Brazil revealed similar findings."

Candy is Prof. of Religious Studies at Indiana University.

The study will be available online Aug. 5 at http://journals.lww.com/smajournalonline/toc/publishahead.

In September, an interview with Brown will be available on the Southern Medical Journal website.

The study is entitled: "Study of the Therapeutic Effects of Proximal Intercessory Prayer (STEPP) on Auditory and Visual Impairments in Rural Mozambique." Southern Medical Journal, September 2010, Volume 103, Issue 9
Posted by John Piippo at 9:12 AM