Coming: The Modal Version of the Ontological Argument for God's Existence 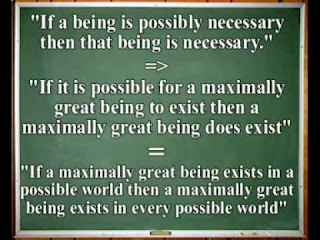 I'll begin my Philosophy of Religion class by presenting Anselm's Ontological Argument for the Existence of God. I've made this presentation so many times, and looked at tons of literature re. it, that I feel very comfortable presenting it. In fact, I love presenting this argument. It has proven to be a great way to begin this course. The argument is:

1) I have an idea of a being a greater than which cannot exist.
2) Therefore, God exists.

This argument turns on: a) what it means to have an "idea;" b) logical possibility and impossibility; and c) necessary existence as an attribute of "a being a greater than which cannot be conceived.

We'll then look at Gaunilo's objection, which fails because his "island a greater than which cannot be conceived" is logically incoherent, since a contingent thing such as an island has no intrinsic maximum.

Then - Kant's objection that "existence" is not a predicate.

What will be new for me, and my class, is that I'll then look at Alvin Plantinga's Modal version of the Ontological Argument. A version of Plantinga's paper that is similiar to the one I am using (in Peterson, et. al.) can be found here. I'm working on ways to explain this version, trying to make it clear. It's a formidable task, I think, to get students who have never heard of anything like this before to get to understand it. I very much enjoy the challenge. And Plantinga's brilliance has always intrigued me.

So, here's one way to state his argument.

This argument makes sense to me. I'll look at it more closely, and I'll need to incorporate the Plantingian language of "maximal greatness" and "maximal excellence" into it.
Posted by John Piippo at 11:56 PM