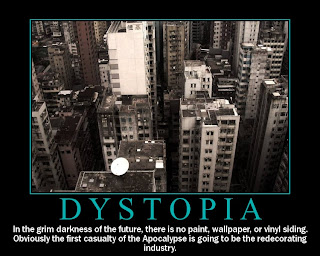 Dystopian literature is making another comeback. But first...

Dystopia - "Dystopia is the opposite of utopia (eu topos- a “good place”, dis topos- a “bad place”), depicting fictional societies in which the living is bad and imperfect caused by human misery, poverty, tyranny and terrorism. Creators of dystopian fictions explore worst possible scenario, highlighting sense of fear in order to show that a perfect society is not possible. In dystopian fiction we can rarely find hope. Although they usually depict world set in near future, they write about things they feared of in the existing world of reality, showing their own concern about some social trends, criticize them and also write about their wish to prevent it. The main theme of dystopian literature is oppression and rebellion, and the rebels are almost always weaker than the oppressors. Paranoia is very evident among citizens in dystopian societies, because they live in fear and they are being very often monitored, betrayed or manipulated. This term was coined by John Stuart Mill in 1868."

Dystopian movies - Idiocracy, A Scanner Darkly, 28 Days Later, Soylent Green (I saw it when it came out!), V for Vendetta, Gattaca, Brazil, Akira, Mad Max, Clockwork Orange, Wall-E, The Matrix, The Ghost In the Shell Series, Children of Men, Blade Runner, and Elf. (Just kidding about that last one. The creation of inner, personal dystopia does not here count.)

Tonight, at 12:01 AM, "Mockinjay" arrives. It's the third of Suzanne Collins' "Hunger Games" books,
"a trilogy of dystopian young-adult novels."  "The “Hunger Games” trilogy unfolds in a grim future-world where children are sent into an arena to fight to the death. Ms. Collins has described the story as rooted in the Greek myth of Theseus and the Minotaur. While dystopian fiction for teenagers has been around for decades, it has recently experienced a small revival in books like “The Maze Runner” by James Dashner and “Incarceron” by Catherine Fisher. Many of these books have also built a considerable audience among adults."

A revival of dystopian literature emerges from a birthing of dystopian bleakness in teens today. If the dystopian theme didn't interpret one's inner life no one would pay attention to it. For many, it appears, the future is dark.
Posted by John Piippo at 9:08 AM