Nietzsche: A "Disgrace" to His Parents 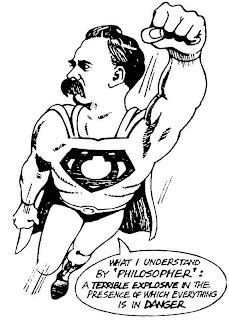 When the brilliant German philosopher and thinker Friedrich Nietzsche was thirty-eight years old he disclosed that he had "not for a moment been able to forget... that my mother called me a disgrace to my dead father." A little over a year before his eventual mental breakdown in 1889 Nietzsche wrote his mother these words: "Never since childhood to have heard anything deep and understanding said about me - that's all part of my fate; also I do not remember having complained about it." (In Stephen N. Williams, The Shadow of the Antichrist: Nietzsche's Critique of Christianity, 21-22)

The disaffirmation of Nietzsche by his parents affected him negatively, as does the disaffirmation of anyone's parents. I have rarely met people who have experienced parental shame and denigration who have sufficiently gotten over it. To experience a mother's and father's blessing is huge; to lack it is devastating. The Vitzian thesis here comes to mind. NYU psychologist Paul Vitz was an atheist who became a theist. In his Faith of the Fatherless: The Psychology of Atheism, Vitz resons, using atheists such as Hume, Russell, Sartre, Camus, H.G. Wells, and Nietzsche, that "intense atheists" are victims of a "defective father syndrome."

Surely all fathers are defective. I know, in my own fathering, I was not always operating out of total love and wisdom. But I did always ask my sons to forgive me. I don't see that's anything to brag about, since it should be as common as breathing air. We're all wrong about a lot of things. Why not come into the open about this?

Williams, in his excellent book on Nietzsche, writes that, while his main concern is not with the man Nietzsche but with his ideas, "it is difficult to block out" Nietzsche's being-plagued by parents who were "disgraced" by him. And that this shame lingered with him until the end and affected, even if only subtly, his worldview.
Posted by John Piippo at 11:11 PM