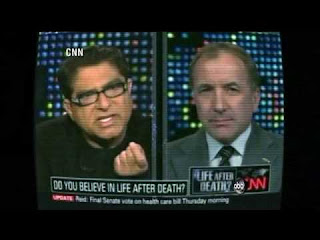 Michael Shermer skewers new agey pop-religionist Deepak Chopra in "Deepak Chopra's God 2.0." I'm with Shermer when he writes things like: "Chopra’s theology notwithstanding, the hydrogen atoms in the sun are not sitting around in a cloud of possibilities waiting for a cosmic mind to signal them to fuse together to form helium atoms and thereby to throw off heat and light for our planet." I wonder if Shermer doesn't simply enjoy publicly feasting on Chopra's new age nonsense.

But Shermer acts as if he has dismissed all philosophical arguments for God's existence. He writes:

"I have debated many theologians who make the traditional arguments for God’s existence: the cosmological argument (prime mover, first cause), the teleological argument (the order and design of the universe), the ontological argument (if it is logically possible for God to exist, then God exists), the anthropic argument (the fine-tuned characteristics of nature, making human life possible), the moral argument (awareness of right and wrong), and others. These are all reasons to believe in God only if you already believe. If you do not already believe, these arguments ring hollow, having been refuted over the ages by philosophers from David Hume to Daniel Dennett."

Two things. It is false that "these are all reasons to believe in God only if you already believe." For example, in my philosophy of religion classes I present a version of the fine-tuning argument for God's existence. At the end of each section I give the students individual oral exams. One section is on philosophical proofs for God's existence and philosophical objections to such proofs. This past spring one of the best students in my class told me, after one of his oral exams, that when he entered my class he did not believe in the existence of God, but as a result of the fine-tuning argument had come to believe in God's existence. So here we have one unbelieving student who was given a reason to believe. I suspect there are more such persons out there.

It is not clear that Hume has refuted these arguments. Hume's criticisms and skepticism re. God are found in every standard philosophy of religion book, to include the one I'm switching to this fall. Philosophically, Hume's work here is must reading. And, to no one's surprise, he is as much criticized as he is applauded.

Re. Dennett, as far as I can tell he offers no new criticisms of the traditional arguments and modern variations of those arguments. Dennett is part of an ongoing discussion, especially as it relates to issues of the evolution of religion and the brain-mind (non)-relationship. But I don't see Dennett as refuting, e.g., things like the fine-tuning argument. Dennett is more interested in offering an evolutionary account of religion than in refuting philosophical arguments. I just don't see how Shermer can invoke Dennett in the refutation of arguments for God.

And Deepak Chopra? No philosopher quotes Chopra in any sense except perhaps as a philosophical example no one would wish to emulate.
Posted by John Piippo at 10:34 PM