The Sinking Ship of Nonsensical Non-science 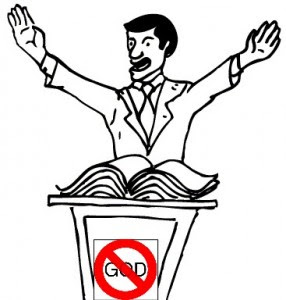 Stay away of "polarizing hatefests" like atheistic science blogs. So counsels Virginia Heffernan in her article "Unnatural Science." For example, staff bloggers have been leaving ScienceBlogs, which includes P.Z. Myers's Pharyngula. (Myers disagrees with Heffernan here.)

ScienceBlogs, and websites like it, are often not really about science but are mostly scientists blogging. "ScienceBlogs has become preoccupied with trivia, name-calling and saber rattling. Maybe that’s why the ScienceBlogs ship started to sink." For example, "over at Pharyngula — which often ranks in the Top 100 blogs on the Internet— PZ Myers revels in sub-“South Park” blasphemy, presenting (in one recent stunt) his sketch of the Prophet Muhammad as a cow-pig hybrid excited about “raping a 9-year-old girl.”"

Heffernan writes that these pseudo-science websites "chip off one-liners, promote their books and jeer at smokers, fat people and churchgoers. Can anyone who still enjoys this class-inflected bloodsport tell me why it has to happen under the banner of science?"

Some years ago I tip-toed into a discussion at a ScienceBlog-type website and got severely ad hominemed. I tried to make a logical point. It was easy to see, by my logical point, that I believe in God. I got hammered, name-called, jeered, mocked, judged. I was not reasoned with, which I could easily have understood and accepted. There's a lot of that out there.

Such websites hammer away at ideology, substitute stridency for contemplation, and pummel its enemies in absentia. "ScienceBlogs has become Fox News for the religion-baiting, peak-oil crowd. Though Myers and other science bloggers boast that they can be jerky in the service of anti-charlatanism, that’s not what’s bothersome about them. What’s bothersome is that the site is misleading. It’s not science by scientists, not even remotely; it’s science blogging by science bloggers. And science blogging, apparently, is a form of redundant and effortfully incendiary rhetoric that draws bad-faith moral authority from the word “science” and from occasional invocations of “peer-reviewed” thises and thats."

Such nonsensical non-science turns some off, especially those interested in the "science" part of a science blog.

Heffernan's analysis gets some disagreement here.
Posted by John Piippo at 5:13 PM