Baptism: Crossing a River of No Return 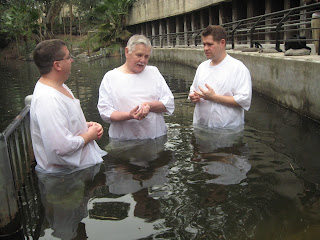 (Josh Bentley [R] about to baptize someone in the Jordan River in Israel. We'll be having baptisms this Sunday at Redeemer.)

In some cultures today the most radical spiritual thing you can do is get baptized. In 1990 I was teaching at Asia Theological College in Singapore. I asked one of my Chinese students, a young man named Kek, what was the hardest thing about becoming a Jesus-follower. He immediately told me, “It was when I got baptized. Then my parents knew I was a ‘serious Christian’.” David Reid, in his introduction to Baptism: Three Views, writes: “An Asian theologian recently related to me how some Chinese non-Christians view baptism, telling their sons and daughters that it’s okay to worship and study the Bible with those Christians, but just don’t get baptized! As nonbelievers they recognize that to be baptized is to cross a river of no return. This perspective is strikingly biblical and instructive. Baptism is a serious proposition.” (Kindle edition, 107-19)

18Then Jesus came to them and said, "All authority in heaven and on earth has been given to me. 19Therefore go and make disciples of all nations, baptizing them in the name of the Father and of the Son and of the Holy Spirit, 20and teaching them to obey everything I have commanded you. And surely I am with you always, to the very end of the age."

Disciple-making, that is, “making” people passionate Jesus-Lovers and followers, includes “baptizing them in the name of the Father and of the Son and of the Holy Spirit.” This seems important. As is “teaching them to obey everything I have commanded you.” In terms of the latter, we have been doing this at Redeemer, literally teaching our people everything, every word, every big and little thing, that Jesus said and did and commanded. But regarding baptism, what is it?

Definitionally we have this:

1) to dip repeatedly, to immerse, to submerge (of vessels sunk) 2) to cleanse by dipping or submerging, to wash, to make clean with water, to wash one's self, bathe 3) to overwhelm (See also Baptism: Three Views, Kindle edition, 208-18)

Operationally, it’s hard to get “sprinkling” out of this, as in infant baptism as practiced in Roman Catholicism and the Lutheranism I was born into. While I can applaud the Lutheran emphasis on infant baptism as exemplary of a faith that is fully disconnected from one's deeds, I do not see the textual evidence for this. I was baptized as an infant. I am thankful my parents did this. But when I became a Jesus-follower and studied the texts for myself, I came to believe in "believer's baptism"; viz., that as one chooses to follow after Jesus and does so "baptism" is a sign of one's immersion in and identification with the Jesus Movement.

Textually, people are becoming Jesus-followers and getting baptized through the book of Acts. At the risk of being accusing of piling on scriptures, consider the following.

Baptism is an experiential sign, signifying the spiritual conversion that has taken place in a person, accompanied by an empowering of the Spirit, who can manifest himself in a variety of ways. Bruce Ware writes: "Baptism is the sign and seal of the new covenant, inaugurated by Christ's death and resurrection, signifying the promise for the one baptized that sins are forgiven, that new life in Christ is received, and that God gives the person a new heart and the indwelling of the Holy Spirit, by faith." (In Baptism: Three Views, Kindle 520-29)

Daniel Reid, in his Introduction to Baptism: Three Views, writes of what might be the most interesting baptism he has ever seen. It was in a Baptist church where a young man was being baptized. Reid writes: "As the boy came up from the water, his father stood up in the congregation and in a loud voice declared, 'This is my beloved son in whom I am well pleased!'" (Kindle edition, 120-130) I love that! This Sunday morning we're having baptisms at our church. To be baptized in Jesus' name is an important kairos-moment in the life of every real Jesus-follower. As this happens, God surely is very pleased. I expect that we'll be experiencing the pleasure of God this Sunday morning!
(I need to point out that two of my hermeneutical heroes, Ben Witherington and N.T. Wright, argue textually for infant baptism over believer's baptism. Witherington does agree that "immersion is [doubtlessly] a better symbol of being baptized into Christ's death than other modes of the practice.")
Posted by John Piippo at 3:32 PM