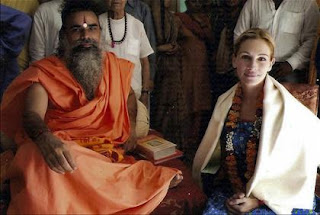 Julia Roberts has announced that she has become a Hindu. This happened while she was in India filming the movie "Eat, Pray, Love."

"Roberts, whose parents are Baptist and Catholic, was so captivated by the ancient religion, she experienced her own spiritual awakening during the shoot and returned home as a Hindu.

The actress reveals she regularly goes to temple to "chant, pray and celebrate" and even takes her husband Danny Moder and their three kids, three-year-old Henry and five-year-old twins Phinnaeus and Hazel, with her.

Roberts has also adopted the belief in reincarnation and she hopes her next life will be a "quiet" one.

She says, "Golly, I've been so spoiled with my friends and family in this life. Next time I want to be just something quiet and supporting.""

And in another article we read:

"During filming in India last year, Julia completely immersed herself in the Hindu culture and was "astounded" during a visit to the Taj Mahal. The screen beauty was apparently "astounded" by the white marble structure, which is the most famous mausoleum on the globe and listed as one of the "seven wonders of the modern world".
At the time, a source said: "Julia was breathless, absolutely astounded by the Taj. She looked on in wonderment as her guide explained the intricate patterns and designs on the marble surface. "The Taj is a legendary symbol of love and hopefully the monument will be an inspiration to her for her latest film.""

What can we say about this?