(Not Quite) The Whorfian Hypothesis Redux 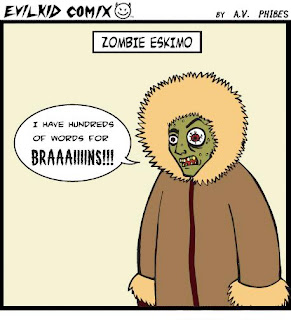 Ahhh... the "Whorfian Hypothesis" is alive and well here, in Guy Deutscher's nytimes article "Does Your Language Shape How You Think?" Whorf's famous essay was published in 1940. "In particular, Whorf announced, Native American languages impose on their speakers a picture of reality that is totally different from ours, so their speakers would simply not be able to understand some of our most basic concepts, like the flow of time or the distinction between objects (like “stone”) and actions (like “fall”)." Whorf's hypothesis made a big initial impact and then, after receiving much criticism, was dismissed. It turned out "there had never actually been any evidence to support his fantastic claims. The reaction was so severe that for decades, any attempts to explore the influence of the mother tongue on our thoughts were relegated to the loony fringes of disrepute." "There is no evidence that any language forbids its speakers to think anything."

But there is evidence that the language we speak influences our experience of the world. Deutscher, an honorary research fellow at the School of Languages, Linguistics and Cultures at the University of Manchester, claims that much evidence suggests, and even shows, that the world looks different to people who speak different languages than ours. (See his forthcoming book, Through the Language Glass: Why the World Looks Different In Other Languages) Deutscher quotes the famous linguist Roman Jakobsen, who wrote: "Languages differ essentially in what they must convey and not in what they may convey.” Whorf, holding to the latter idea, was wrong. But Deutscher thinks Jakobson was correct about the former.

Deutscher uses a remote Australian aboriginal tongue, Guugu Yimithirr, to make his point. The study of this language brought "the astounding realization that not all languages conform to what we have always taken as simply “natural.”" For example, in describing and space and the position of objects, we English speakers use the "egocentric system"; i.e., we describe spatial objects and their positions with words like "right," "left," "front," and "behind" in relation to our selves. But the Guugu Yimithirr describe spatial positions relying on "cardinal directions"; i.e., "north," "south," "east," and "west." What's interesting here, among other things, s that egocentric directions change, while cardinal directions do not. In the latter "north" is always "north," while on the former "right" shifts depending on the direction one is facing. It might seem absurd for us to tell a football player to take the ball and run to the east and then to the south. But this is how cultures speak if they operate spatially out of geographic coordinates. "So different languages certainly make us speak about space in very different ways." And that causes us to experience space differently.

So what? Here, for example: "As strange as it may sound, our experience of a Chagall painting actually depends to some extent on whether our language has a word for blue." Deutscher concludes: "The habits of mind that our culture has instilled in us from infancy shape our orientation to the world and our emotional responses to the objects we encounter, and their consequences probably go far beyond what has been experimentally demonstrated so far; they may also have a marked impact on our beliefs, values and ideologies. We may not know as yet how to measure these consequences directly or how to assess their contribution to cultural or political misunderstandings. But as a first step toward understanding one another, we can do better than pretending we all think the same."

The research that Deutscher amasses has, I think, implications for understanding religious experience. There are a few dissertations waiting to be written here. I also feel some resonances with Lakoff and Johnson's Metaphors We Live By and the literature that has spun off their work.
Posted by John Piippo at 5:30 PM