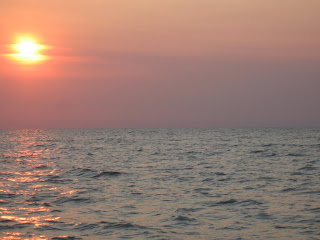 My conversion from weak deism to Christian theism began with a "religious experience." I was in a social fraternity at Northern Illinois University, living with three of my fraternity brothers. I was a music theory major, played guitar in a couple of bar bands, drank a lot, and did drugs nearly every day. I never thought about God. I never prayed, even as my life was falling apart around me.

One night I was playing in my band, somewhere in the Chicago area. I was on stage, and the thought came to me: "I have a problem." My drug-using roommate had recently said the same to me. When he told me this I laughed it off. Coming from him, I thought it was ridiculous. Now, on stage, I was thinking that he was right.

My world was rocked. An inner revolution had begun inside of me. In that moment a clarity came over me and I knew, beyond a doubt, that God existed, and that God loved me. For three days (a good biblical number, right?) I wrestled about what to do with this. My resistance to becoming a God-follower was mainly due to my fear about what my friends and fraternity brothers would think of me. Actually, a lot of my problems were because of my fear of what others thought of me. So I chose to follow God, which was important for two reasons: 1) I now had a life-purpose; and 2) I finally made a choice that was not a function of what others thought of me.

I had a religious experience. A God-encounter. I see it as an indisputable fact that, historically, this was the moment when my life was forever changed. I see it as disputable that what happened to me was an encounter with God. Some will dispute this. And inwardly, I have disputed it because of my training as a reductionist (cf. B.F. Skinner's claim that science can reduce all mystery to knowledge). But the overall sense I have is that, on that day, God came to me, experientially. As I write this, I do not doubt it. Nor am I repressing doubts about this, in denial about this, or feigning certainty for the sake of giving some kind of personal testimony that might convince others.

I am certain it will not convince a number of people. The fact that this happened to me and that I perceive it as being from-God does not serve as an argument, to others, for the existence of God. I don't expect others to be convinced that God exists on the basis of my experience. Equally, I am existentially unmoved by the doubts of others. Such is, often, the nature of religious experience. I think it's also the nature of nonreligious experience. For example John Allen Paulos, in Irreligion, claims to have no sense of a God. I don't doubt this. But Paulos's non-sensing of God does nothing to cause me to question my sensing of God, just as my sensing of God has no effect, I presume, on Paulos. He would think my experience could have nothing to do with God since God does not exist; I think any moments of Einsteinian wonder have to do with God.

I think an atheist's non-experience of God could existentially validate their atheism. In the same way my experience of God validates my theism. As it should. And no apologetic is given either way. So, a few things about the nature of religious experience.

According to William James, "religious experiences are significant because they form the root of religion." (Peterson, Hasker, Reichenbach and Basinger, Philosophy of Religion, Fourth edition, 35) If this is true, then without religious experiences persons are not really religious. I think I have met people like this. Their "faith" is only theoretical and intellectual. There are forms of Christianity that emphasize the intellectual-theoretical to the point of disparaging the experiential. For example, the classic "Four Spiritual Laws" place "feelings" as being the caboose at the end of the spiritual train. For James, experiences are located in the engine room. It is precisely my ongoing spiritual experience that fuels the engine of my spiritual train. It seems as if I've got the God-gene.

Religious experiencing is important in Christianity. Philosopher William P. Alston, in his essay "Religious Experience as Perception of God," writes: "The main function of the experience of God in theistic religion is that it constitutes a mode, an avenue, of communion between god and us. It makes it possible for us to enter into personal interaction with God... And if God exists, there is no reason to suppose that this perception is not sometimes veridical rather than delusory." (In Ib., 57) As Kierkegaard knew, religious truth is deeply subjective and personal. SK writes: "Here is a definition of truth: An objective uncertainty held fast in an appropriation-process of the most passionate inwardness is the truth, the highest truth attainable for an existing person." (Concluding Unscientific Postscript; in Ib., 113)

(See also some things I have written about non-discursive experiences - here, and here.)
Posted by John Piippo at 10:07 PM